The Butcher Shop, an oil on canvas painting by Annibale Carracci, early 1580’s.  Two figures two butchers.  The man on the left looks at a knife he draws out of its sheath at his waist; the man on the right looks at us as he presents a cut of meat.  Red hues dominate the painting giving all a flush of life and light, even to the sheep’s head on the floor.  The brushwork highlights folds in the butcher’s salmon-colored shirt; textures of wood, spike, hook and shadow; delicate movements of color suggesting meat, fat, skin, blood and deeper hiding places.  A work demonstrating the skills of one of the great painters of the Baroque style.  Yet, a painted carcass cannot reveal the full magic of its real counterpart.   Let’s look at two butchers at work, Executive Butcher Dave Beli and Master Butcher Michael Cross.

Specific words, exact cuts, particular knives and saws–all to dissect the animal not into what is studied in an anatomy lesson, but what is prepared, cooked and eaten.  The words of painters talking about brushes, colors, crafting of three dimensions dances well and intricately with the language of blade and bone.  Here’s the world of a beef shank, or maybe better written, a layer in a day in the life of a beef shank.  A fine moment to read one of my favorite poems, Butcher Shop by Charles Simic.

Sometimes walking late at night
I stop before a closed butcher shop.
There is a single light in the store
Like the light in which the convict digs his tunnel.

An apron hangs on the hook:
The blood on it smeared into a map
Of the great continents of blood,
The great rivers and oceans of blood.

There are knives that glitter like altars
In a dark church
Where they bring the cripple and the imbecile
To be healed.

There’s a wooden block where bones are broken,
Scraped clean—a river dried to its bed
Where I am fed,
Where deep in the night I hear a voice.

Ranch to Kitchen now offers cuts at a local farmer’s market we frequent. Gabriela visited and was greeted by two large beef shanks, and yes, I’m thinking osso buco–not veal, but we must not reject an older animal, maybe even one more mature.  Look at the red glow. 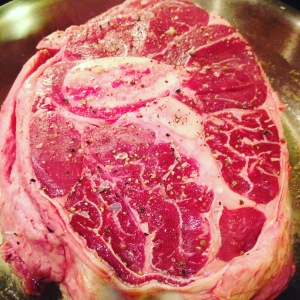 A bit more dramatic than Carruci’s?  Maybe, but then this is a play of light into my Iphone with the addition of a Clarendon filter.  Ah, the red.  I’m using walnut oil with a sprinkling of sea salt flakes and freshly ground pepper.  The stove flames at medium high and my intention is to sear the shank on both sides–looking for a deep brown and patina-worn gold. Fire is my brush in this studio, a copper pan the canvas, and this well-marbled thickness of beef my design.

I flip the shank over to brown the other side, and reveal my painting, my shin.  What do you see?  Would the parallel be more accurate as sculpture rather than painting?  Consider the words of Joshua C. Taylor in his book Learning to Look: A Handbook for the Visual Arts.

A piece of sculpture seems to create an aura, an atmosphere in which it exists and in which every form seems particularly important, and this aura is dependent on a sensitive relationship between the solid forms of the work and the space around.  The sculptor creates not only an object of a certain size and weight but also a space that we experience in a specific way.  (90)

Let’s agree that the image you see in this post is a photograph, and the definitions of paintings may be allowed to discuss line, form and color; yet, if you were standing in my kitchen as the meat sears, I think we would talk of material, sculpting, and how the searing beef shank creates the copper pan, stove, and kitchen.  For now, pour a glass of Nebbiolo, Reposado Tequila, or a single malt from the Isle of Skye and dream of smoke, smell of a small fire in a forest charring wood, crackle of oil and animal fat, amino acids and sugars interacting to smell like toast, roasting nuts, a handful of peat, a certain umami in the air, voices from a butcher’s block where bones are broken, and in the center of it all the soup of marrow bubbling, whispering. Why not a sonata by Arcangelo Corelli as well. Bon Appétit!