Maybe it’s because of Martin Picard’s Pied du Cochon Burger.  Maybe it’s because my friend Sarah Mangrem gave me beef sausage from her family’s farm.  Maybe I didn’t need a cause nor reason, maybe it’s just fate.  No matter, for days and nights I’ve been carrying around a vision of an improbable, impossible sausage sandwich and I finally decided yesterday to bring it to life. 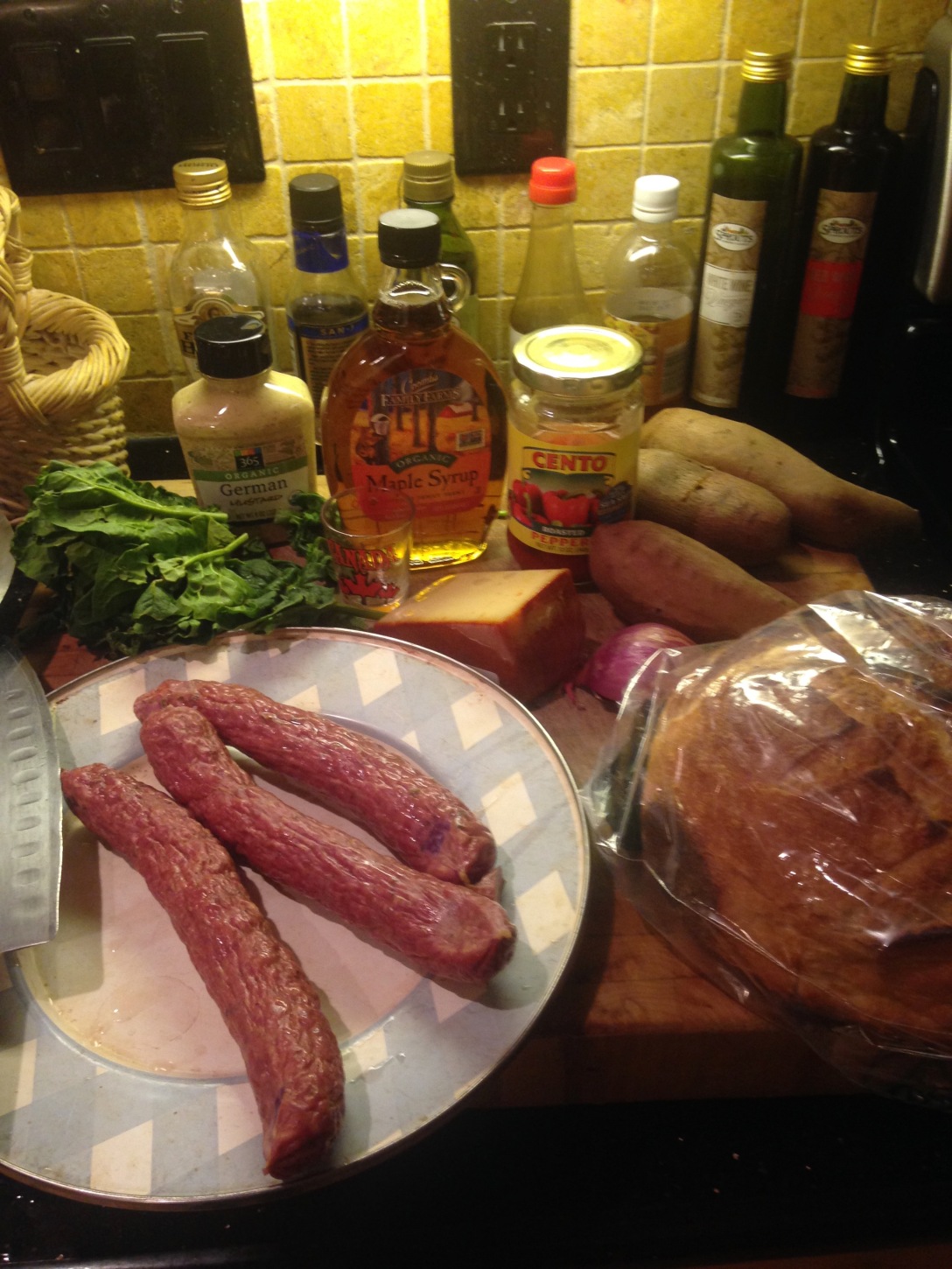 I assembled ingredients in the kitchen: dried beef sausage, spinach, German mustard, maple syrup, cheddar, roasted red peppers, sweet potatoes, shallots and fresh sourdough bread.  Might be a good time to reference the Aleph of Alpehs, the Larousse Gastronomique: Saucisse–This word comes from the Latin salsisiium, from salsus, salted.  Bon.  Harold McGee in On Food and Cooking points out the wide variety of sausage.

There are an infinite number of variations on the sausage theme, but most of them fall into a handful of families.  Sausages may be sold raw and eaten freshly cooked; they may be fermented; they may be air-dried, cooked, and/or smoked to varying degrees in order to keep for a few days or indefinitely.  The meat and fat may be chopped into discrete pieces of varying size, or they may be disintegrated, blended together, and cooked into a homogeneous mass.  And the sausage may either be mostly meat and fat, or it may include a substantial proportion of other ingredients.  (169-170) 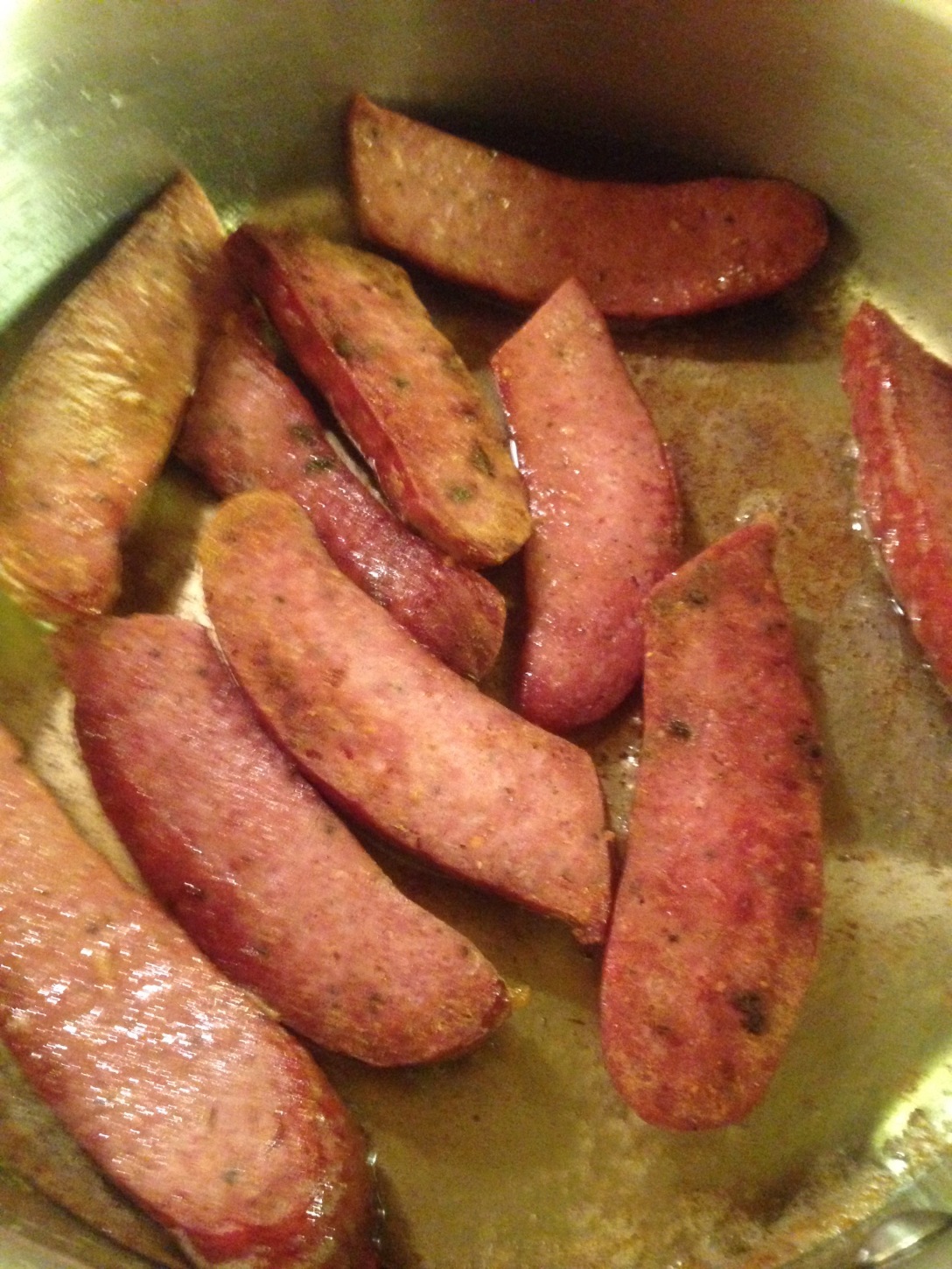 I love to render fat from cured pork jowl, which then allows me to share the crispy, salted fatness with my son and have a wonderful oil for the sausage.  Fry away.  I sliced the sausage in half in order for inside and outside to taste the pig oil and butter.  Jane Grigson in Charcuterie and French Pork Cookery has a lovely observation on the making of sausage.

The Romans are, in fact, the first recorded sausage-makers, their intention being-as the derivation suggests-to preserve the smaller parts and scraps of the pig for winter eating. Though unwise to say in a Frenchmen’s hearing, the Italians are still the supreme producers of dried and smoked sausages.  They use beef, as well as pork, but not usually donkey as some Frenchmen firmly believe.  (114) 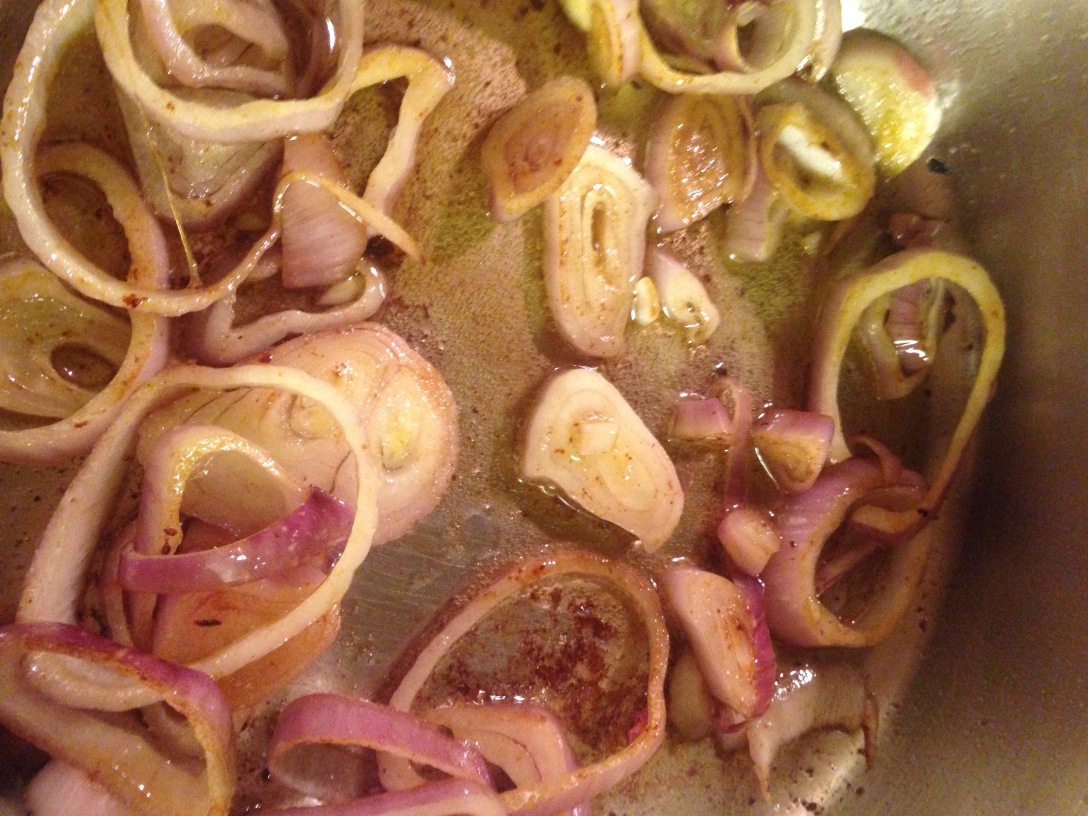 Removing and setting aside the fried sausage, I placed a generous portion of shallots.  I then added roasted red peppers, letting all mix and mingle, then removed and set aside. 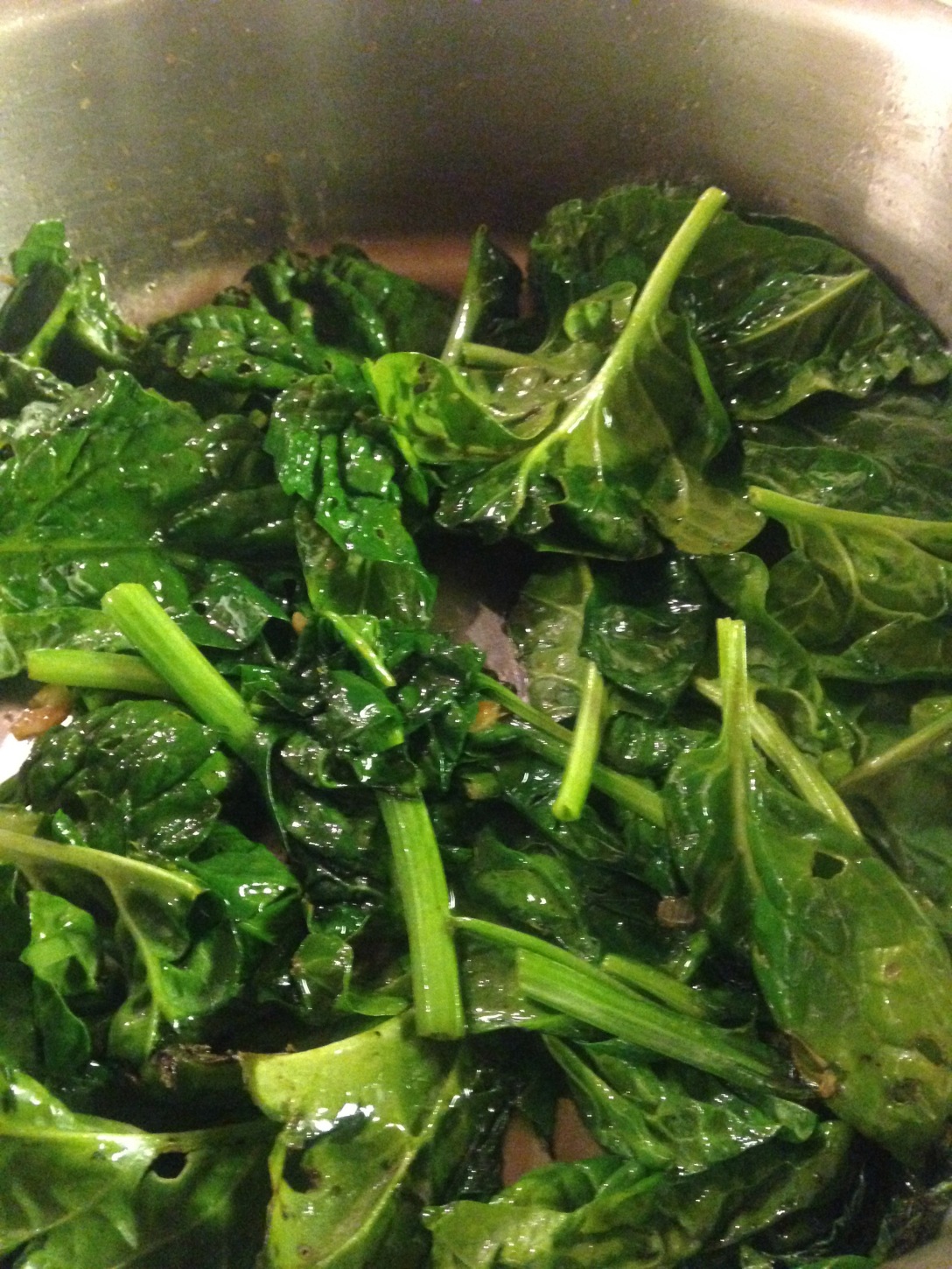 Time for spinach to absorb all that has passed through and lingered in this wonderful fat reduction.  Time for a few lines from Charles Simic’s poem Folk Songs.

Sausage-makers of History,
The bloody kind,
You all hail from a village
Where the dog barking at the moon
Is the only poet.

Charles Simic has also penned his love of sausages in prose as you can read in Poetry of Sausages. 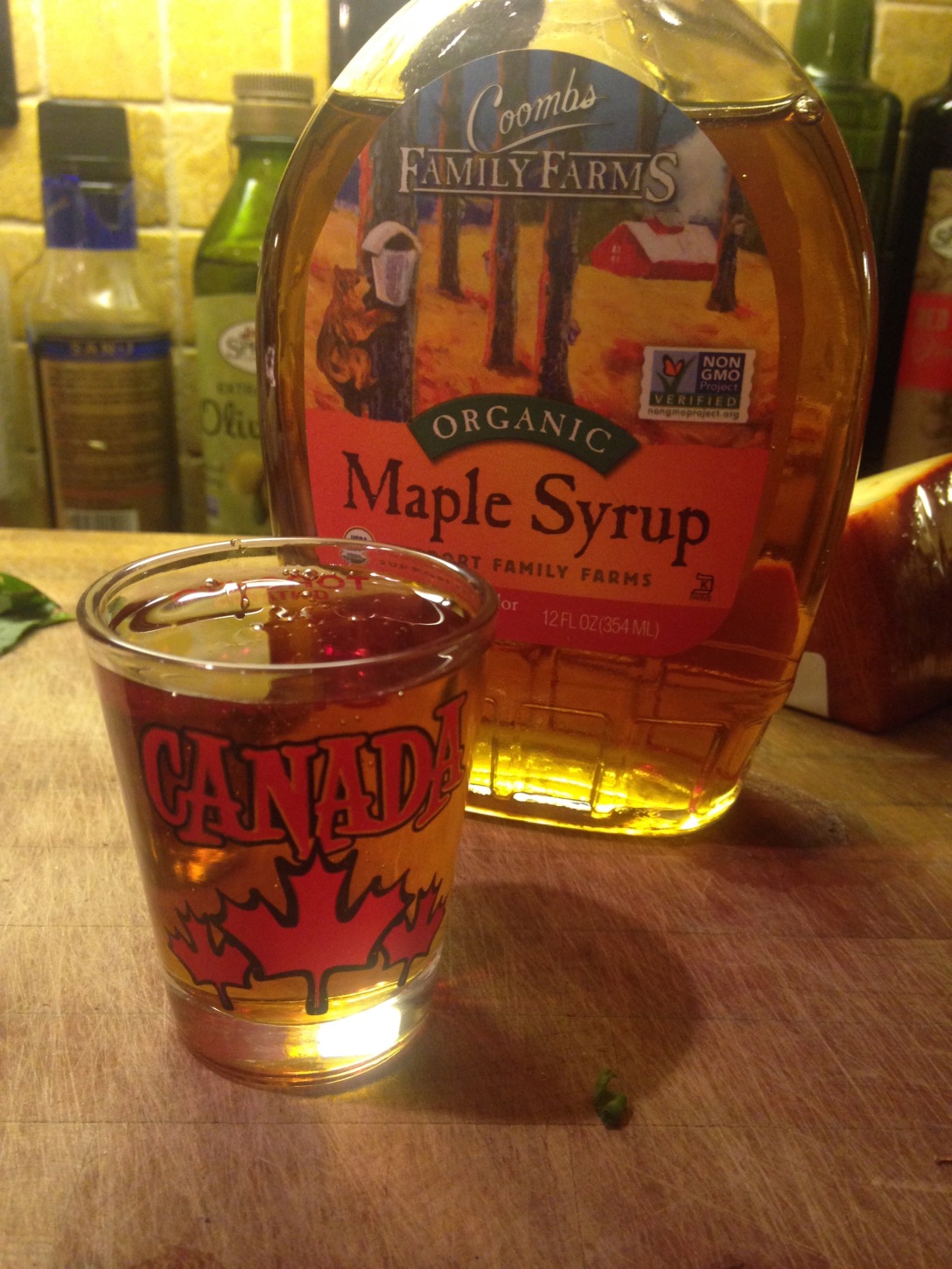 “O Canada,” it’s time for the Mashed Sweet Potatoes with Maple Syrup.  I’ve boiled the sweet potatoes so they’re consistent and soft, so I simmered heavy cream and butter, added the potatoes, mashed a bit, then added this shot full of maple syrup and mashed and whisked until all was a smooth creaminess. 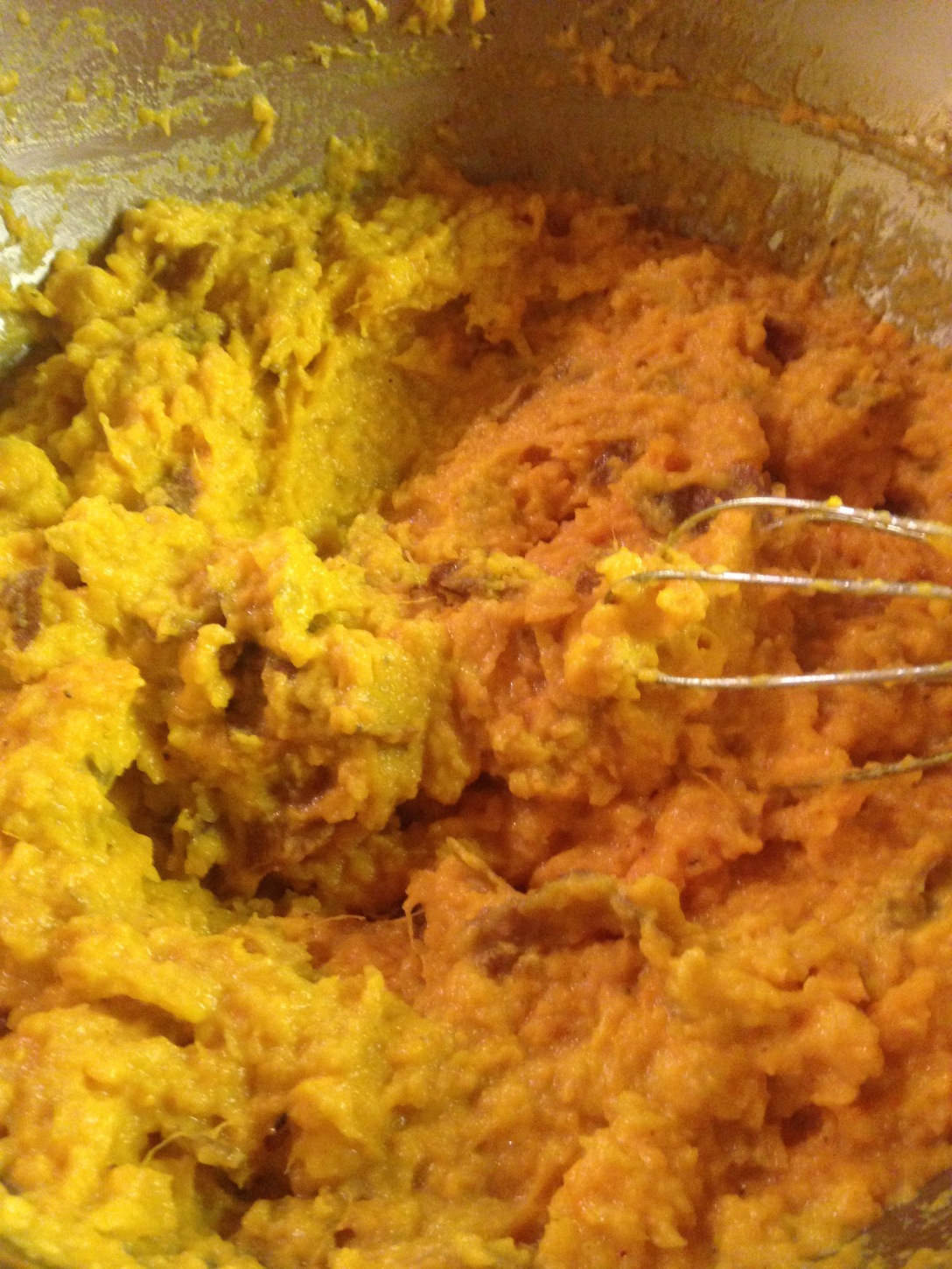 So creamy.  Now it’s time for architecture, for the building of layers into a whole called a “Sausage Sandwich.”  I have to consider floors, walls, ceilings, rooms, chambers, antechambers, stairways, closets, roofs and doors.  Here’s a fascinating article from Archinet News taking my metaphor further, Play With Your Food: Hunting for the link between architecture and food. 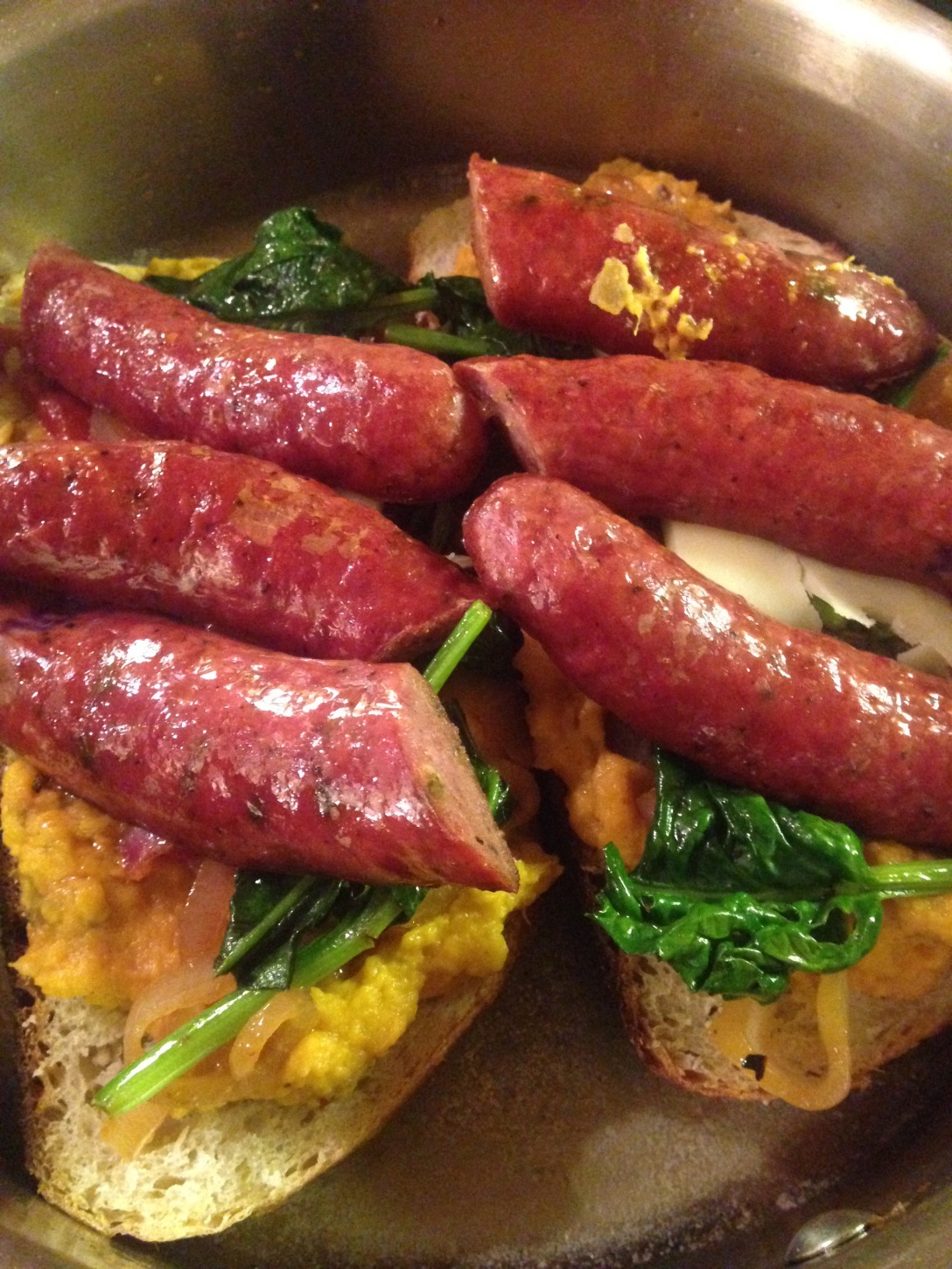 Half a stick of butter in the pan melted, than I laid down two thick cuts of the sourdough bread.  I spread a generous portion of the mashed sweet potatoes with maple syrup, added a layer of sauteed shallots and roasted red peppers, then a floor of spinach, a slice of cheddar, and then a slanted row of sausage. 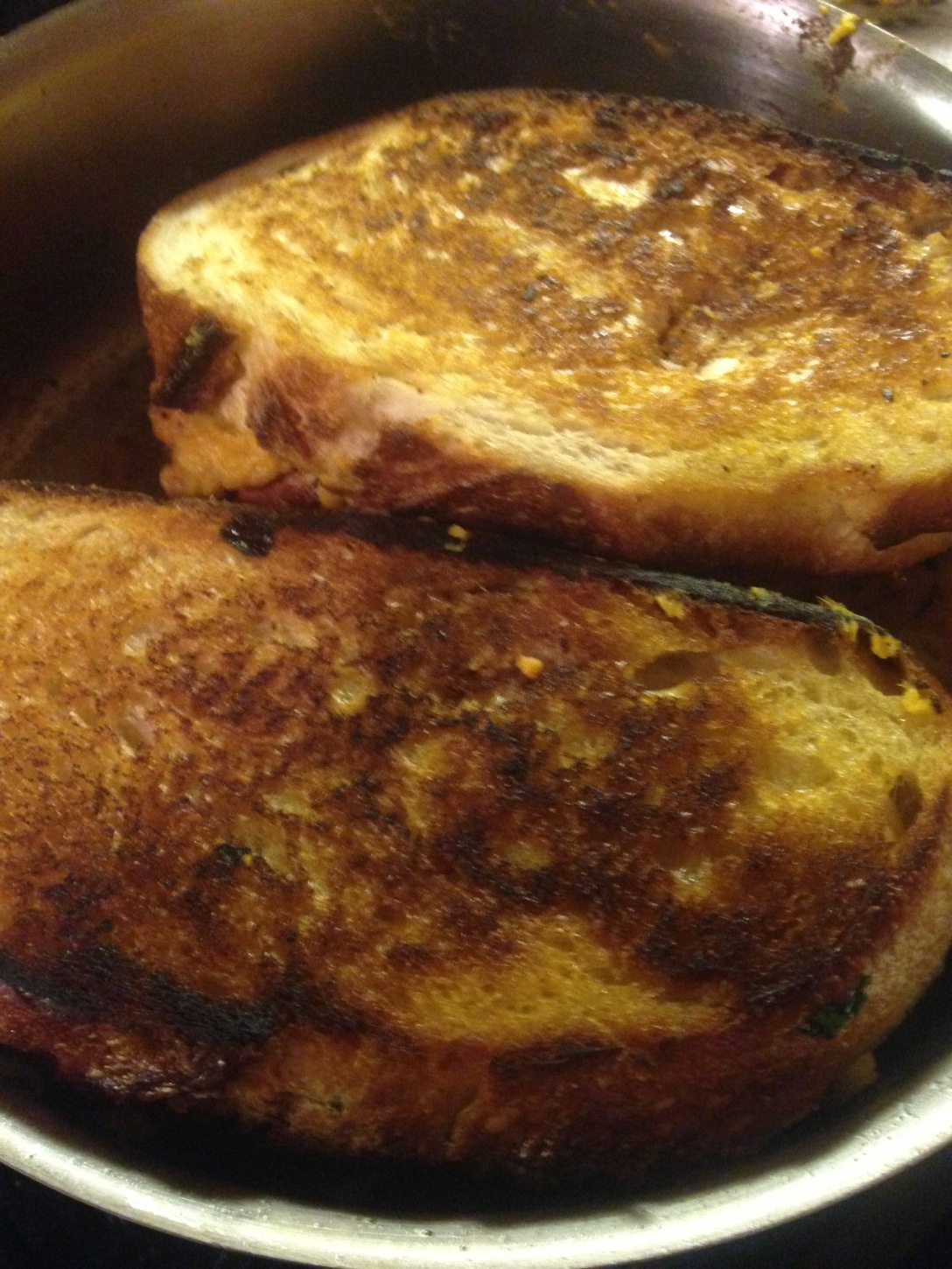 When I smelled the bread toasting into something dark and crispy, I slathered more mashed sweet potatoes and maple syrup on a thick cut of sourdough bread, added a slice of cheddar, placed ontop of the open face, and flipped.  Bravissima!  The roof of the world! 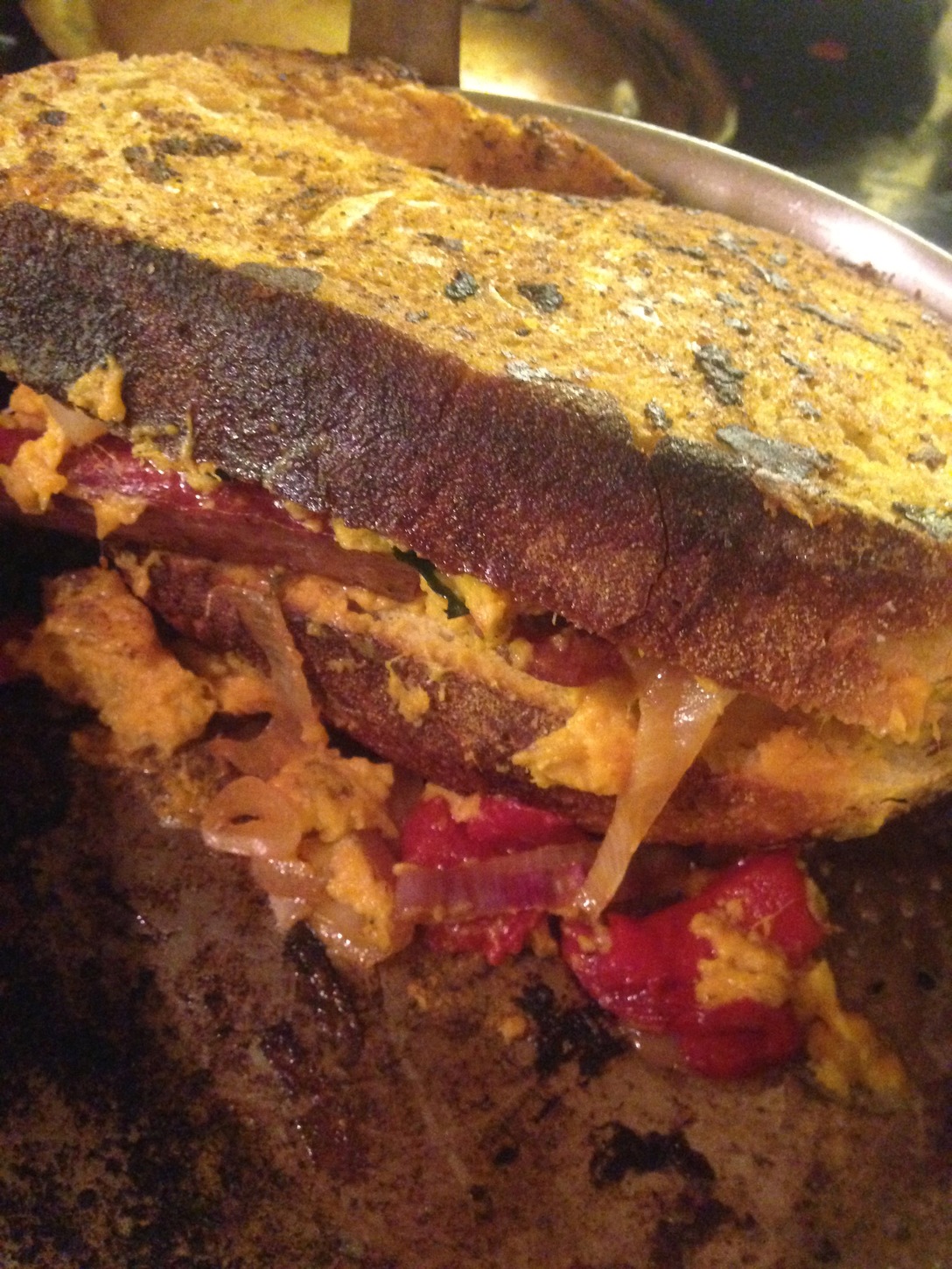 Watch it sizzle, spit, pop, and crisp in the pan.  A house of your dreams?  A workplace worthy of your imagination?  The Republic Plato would eat and say no more? 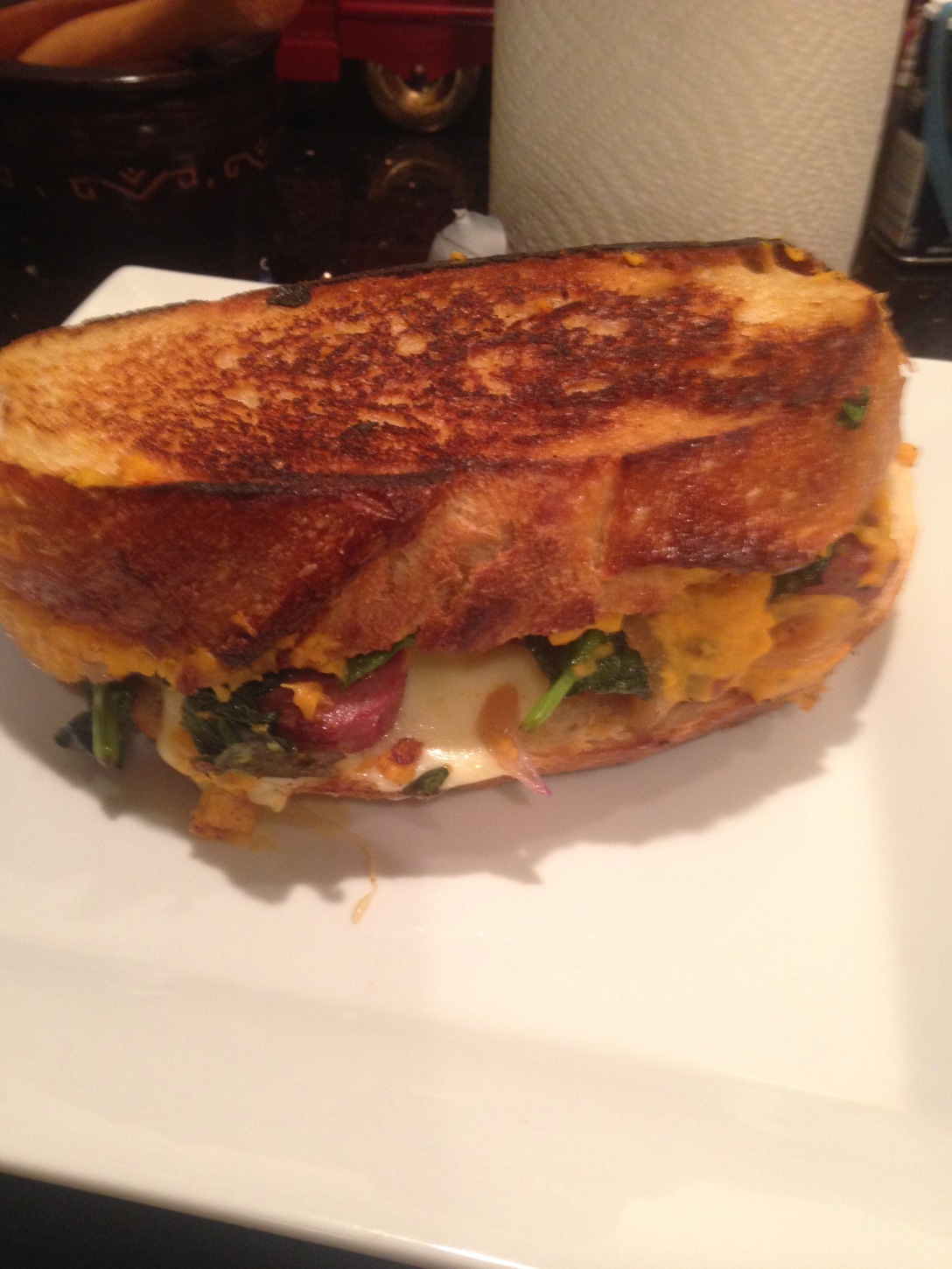 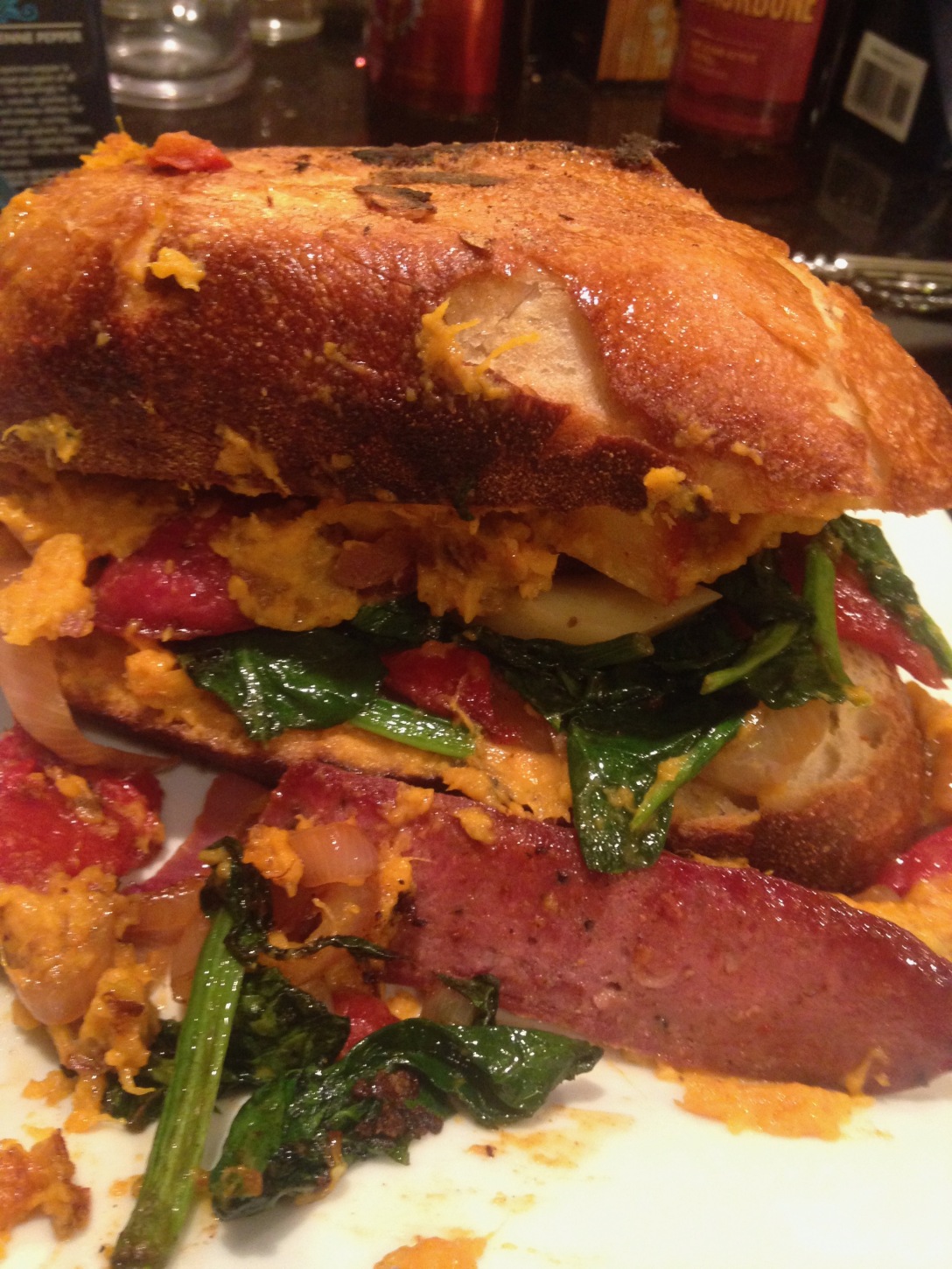 What did I pair this creation with?  Why, a Real Ale Brewing Company Devil’s Backbone, a Belgian-style tripel.  As you might expect, my wife, son and I are unable to finish our sandwiches, I can only manage the top two floors and I’m full.  So, there will be leftovers. 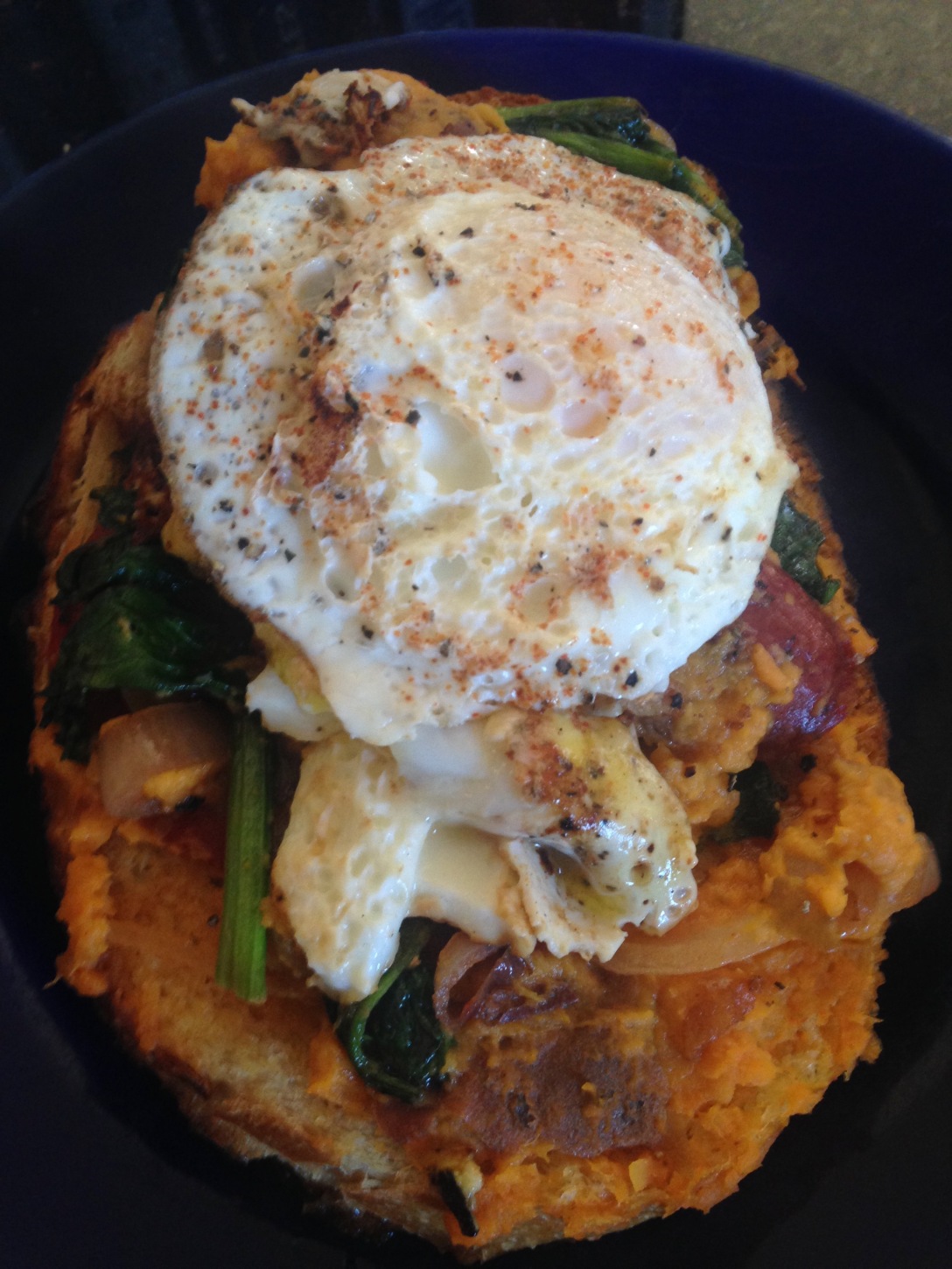 And the following morning, I fry two eggs and top the lower-half of my food house with their white, yolky holiness.  What music to pair this with?  Why, Eggs and Sausage (In a Cadillac with Susan Michelson) from Tom Waits.  Bon Appétit!

One thought on “The Improbable, Impossible Sausage Sandwich.”