Apicius’ eponymous cookbook dates from the first century to the fifth century CE as determined by the scholars who have translated and supplied a critical introduction to this 2006 CE edition of one of the ancient world’s great tomes of recipes.

Quite a range of time–from let’s say Claudius,

without forgetting Caligula, of course,

Through the emperors, wars, assassinations, and all the other trappings of an ancient empire, Romans were cooking, or to be more specific, those who had any amount of money had a slave to do the cooking for them, though the gourmands in the family, from the imperial court to craftsmen, small farmers and teachers would often select meat and produce, as well as judging the merits of the meal.  As Cicero writes in De Officiis,

Least respectable of all are those trades which cater to sensual pleasures: “Fishmongers, butchers, cooks, and poulterers,
And fishermen,” as Terence says. Add to these, if you please, the perfumers, dancers, and the whole corps de ballet. (1.150)

I’m going Roman for New Year’s Eve and roasting a Gulf Coast Red Snapper in a sauce from this Roman culinary guide.  Since I’m roasting, I thought I would split the difference between the listed recipes, and use a bit from boiled and grilled fish.  Here is our hero, let’s call him Justinian, 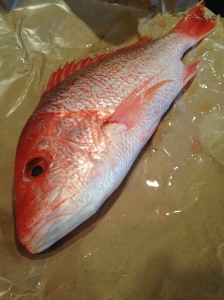 after “the last Roman.”

So back to Apicius, I study the recipes for fish sauce carefully. 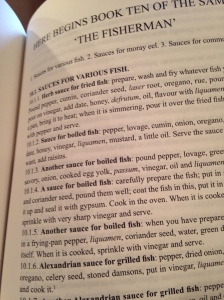 Quite a few with a number of ingredients.  A note: liquamen receives a detailed explanation in the appendix of this edition, and apparently there’s a crucial debate going on about Roman fish sauce.

The debate about fish sauce is ongoing and the issue remains controversial. How we interpret these sauces is integral to understanding Roman food, particularly so in the case of the recipes in Apicius  (373).

There appears to be confusion over the difference between one fish sauce called garum and one called liquamen–are they both a fermented fish sauce or not?  Here is Isidore of Seville quoting Pliny the Elder.

Liquamen is so called because little fish dissolved during salting produce the liquid of that name.

And then we have this from the Geoponica, a tenth- centurial CE cooking manual.

. . . fish blood and entrails as well as small fish such as sprat, smelt, mullet were all salted and shaken and fermented in the sun  (375). 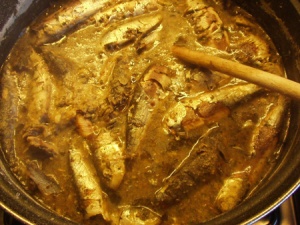 I found a recipe at Coquinaria (they use garum and liquamen interchangeably) and will try this in the future, but for now I’ll use Thai fish sauce and the following ingredients.

Now it’s time to give Justinian a bath. 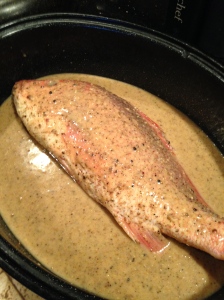 Speaking of Roman baths, they were part of everyday life in the Empire. Here’s a taste from Petronius’ The Satyricon.

Anyway, we entered the baths where we began sweating at once and we went immediately into the cold water.  Trimlachio had been smothered in perfume and was already rubbed down, not with linen towels, but with bath-robes of the finest wool.  As this was going on, three masseurs sat drinking Falernian wine in front of him.  Through quarreling they spilled most of it and Trimalchio said they were drinking his health  (52).

. . . a deep circular tray with the twelve signs of the Zodiac arranged around the edge.  Over each of them the chef had placed some appropriate dainty suggested by the subject.  Over Aries the Ram, chickpeas; over Taurus the Bull, a beefsteak; over the Heavenly Twins, testicles and kidneys; over Cancer the Crab, a garland; over Leo the Lion, an African fig; over Virgo the Virgin, a young sow’s udder; over Libra the Scales, a balance with a cheesecake in one pan and a pastry in the other; over Scorpio, a sea scorpion; over Sagittarius the Archer, a sea bream with eyespots; over Capricorn , a lobster; over Aquarius the Water-Carrier, a goose; over Pisces the Fishes, two mullets.  In the centre was a piece of grassy turf bearing a honeycomb.  (56-57)

Of course, a Roman dinner could be tense.

Or one could take a Roman Holiday.

Oh yes, Justinian.  I believe the moment of truth has arrived.

Ah, the darkness, the promise of white flesh underneath.  To the plating!

Beside a portion of Justinian rests Gabriela’s Green Bean Salad with Almonds.  To the table!

Cheers!  Let the eating begin, and it does.  The boy and Gabriela praise the fish and sauce.  Ah, happiness.

And later, much later, I retire to the backyard for cognac and a cigar.