The old stories tell of a bride . . . and then a war, and as always, banquet after banquet. Remember Helen?  Daughter of Zeus and Leda.

In this Peter Paul Rubens’ version (there are two) Leda and the Swan (aka Zeus) may share a kiss or you could also interpret that she’s asleep, either way it’s a moment that brings together beast, human and divine. Seduction or rape, this image puzzles and troubles us, consider in 2012 a photograph depicting the swan ravaging a woman in an exhibit in England was removed because some thought it condoned bestiality. William Butler Yeats’ famous sonnet portrays a great violence in this coupling.

A sudden blow: the great wings beating still
Above the staggering girl, her thighs caressed
By the dark webs, her nape caught in his bill,
He holds her helpless breast upon his breast.
How can those terrified vague fingers push
The feathered glory from her loosening thighs?
And how can body, laid in that white rush,
But feel the strange heart beating where it lies?
A shudder in the loins engenders there
The broken wall, the burning roof and tower
And Agamemnon dead.
Being so caught up,
So mastered by the brute blood of the air,
Did she put on his knowledge with his power
Before the indifferent beak could let her drop?

Paul Cézanne’s painting depicts an indifference amongst the blue and orange palette.  Of all that may be noted in paintings of this mythic moment, the look on Leda’s face remains a key in interpreting our level of discomfort or erotic engagement.  Yeats’ poem centers on the horror that’s to come.  “And Agamemnon dead,” springs us forward from this violation to a long series of catastrophes.  In order to appease Artemis so she will let winds fill the sails of Greek ships set for Troy, Agamemnon sacrifices his daughter Iphigenia; Greek and Trojan corpses will cover the fields of Troy, a famed will burn to the ground with all its citizens killed or enslaved; and Agamemnon will be slaughtered like an animal when he returns home to his wife Klytaimestra, sister of Helen.  Listen to Agamemnon talk to Odysseus in the underworld of Book 11 of The Odyssey.

Aegisthus was the cause of my death.

He killed me with the help of my cursed wife

After inviting me to a feast in his house,

So I died a most pitiable death,

And all around me my men were killed

For a wedding banquet or dinner party

In the house of a rich and powerful man.

You have seen many men cut down, both

In single combat and in the crush of battle,

But your heart would have grieved

As never before at the sight of us lying

Around the wine-bowl and the laden tables

The great wrong of Agamemnon’s death, his murder, lies in the way he’s cut down like a sacrificial animal, like “white-tusked swine / For a wedding banquet.”  Instead of aspiring and deserving status of the divine, a human becomes an animal–becomes food.

Sorry, couldn’t resist a “Hannibal” moment.  Let’s turn back a few pages. When Helen comes of age, her hand in marriage is sought by all the royal, young men of Greece; so many, that Odysseus binds them all in agreement ensuring whoever shares a wedding bed with Helen receives support, alliance from all the other suitors instead of plots and murder.  A fate which will eventually press upon Odysseus, but for now let’s look at Helen, the bride.

As with all brides, the room belongs to her. At 120″ x 90″ x 90″, here standing regally in the North Carolina Museum of Modern Art, she makes a statement when you first see her. Of course we already glossed this part of the story, how all the eligible bachelors of Greece arrived at her father’s court in Sparta, and Tyndareus a bit concerned war might break-out over his decision, decides, with Odysseus’ wisdom, to have all suitors swear an oath to honor his choice of groom.  On the road between Sparta and Arcadia, Tyndareus has a horse sacrificed, the suitors stand amongst the blood and flesh, utter solemn words, and then the animal is buried.  Glass, glue, wood and paint, this bride signifies not only beauty, sacrifice and honor,  but also the banquet which celebrates such a wonder. 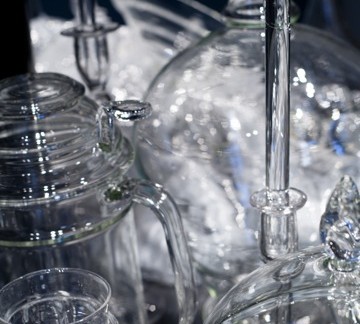 Like a wedding cake, Beth Lipman’s Bride stands as a monument to the opulence, decadence and hunger at the center of marriage.  In Eugenia R. Van Vliet’s delicious book Dinners with Famous Women, she lists and offers the recipes for Helen’s special day: olives, radishes with tops, feta cheese, pita bread, honey glazed shrimp, chicken stuffed with olives, Dionysian cabbage, leg of lamb with dates, eggs with pine nuts and herbs, pancakes with honey, sesame seeds and figs, Alexandrian sweets, fresh fruit in spiced syrup, Greek wedding cake. Vliet points out that according to custom Helen was forbidden from eating this meal with the men.  Did she and the other women eat the same courses in another room?  Were they sequestered in the kitchen listening to the men carouse?  Not the most auspicious of beginnings and considering one day Paris will visit and carry Helen away, and Menelaus will enlist his brother to help him go to war over his lost bride, and great Troy will fall and burn, it may not be surprising the last tier of Beth Lipman’s work has broken and melted glass chaotically tumbled together.

At times, there’s no distance in time between the wedding and broken glass, here Ena Squire-Brown walks to her wedding from her bombed house during the blitz in London in 1940.  Helen will marry Priam who takes her to Troy, and then with Paris’ death, she will marry Priam’s brother Deiphobus–a wedding during war and her adopted city which has already made its fateful decision and accepted the Trojan Horse.  As Helen walks with her new husband she knows what’s in the horse and imitates voices of the Greek soldiers’ wives, and when no one falls for the trick, she walks back to her marriage chamber waiting for fire and blood.  Return to Agamemnon’s death, as his wife Klytaimestra words it in Anne Carson’s masterful translation of Aeschylus’ Agamemnon.

Rejoice if you want to.  I am on top

And this man has the libation he deserves.

to the brim with evils.

Whether the feasting table or mixing bowl, the horror of Agamemnon’s death occurs in the appropriation of what the banquet represents, best expressed at the beginning of Book 9 of The Odyssey.

Nothing we do is sweeter than this—

A cheerful gathering of all the people

Sitting side by side throughout the halls,

Feasting and listening to a singer of tales,

The tables filled with food and drink,

The server drawing wine from the bowl

And bringing it around to fill our cups.

Odysseus’ philosophy of the art of living has a marriage at its center, a union from which all other security and human warmth grows.  For this scene to become a murder, the murder of a king, is to offer a nightmare, a very unsettling one, because the potential is always there.  Isn’t the table set with weapons, knives and forks, with spoons, plates and goblets able to do their damage?  Don’t we sit down to a meal dining on an animal, as we, as animals, look on and eat?  Isn’t it possible to look across and around the table and wonder are we really safe?  Is everyone going to observe the rules and not draw knives on each other?  And who and what are we dining on?  Are we always so sure of the difference? I’ll leave you with those questions.  I’m off to make a Lowcountry Seafood Boil, which will be the centerpiece of my next post, as well as working through appetizing moments of food and the divine sharing space, an unsettling space at that.  Until then, I’ll offer for desert, the man in black.  Bon Appétit!