Leroy Campbell’s Table Talk portrays three generations of a family gathered round plates full of corn, greens, tomatoes and rolls.  Newspaper articles focused on African-american culture stitch together the tablecloth.  Bright, lively colors clothe family, furniture and walls.  Two black and white portraits of ancestors watch over them all. Campbell creates his work out of Gullah-Geechee culture, which reaches back to the West African Rice Coast, from present-day Senegal to Angola.  The history before the European slave trade of Ancient Ghana, Mali, the Songhai Empire, the Volta Kingdoms and the Asante Empire reveals a range of political, civil and judicial systems, along with complex trading routes and universities.  And, of course, foodways traditions.  The term “rice coast” points to ancient rice cultivation in West Africa, as David Eltis, Philip Morgan, and David Richardson write in their paper The African Contribution to Rice Cultivation in the Americas,

Long before the arrival of Europeans, West Africans had developed complex systems of mangrove or tidal floodplain, coastal estuarine, and upland rainfed forms of rice cultivation. The area of greatest rice specialization was confined to the Upper Guinea coast—that part of the African littoral stretching from present-day Senegal to Liberia, and encompassing three slave trading regions, Senegambia, the Windward Coast, and Sierra Leone–but rice cultivation also reached into the interior for almost 2000 km to Lake Chad.

People from such cultures as Baga, Kissi, Limba, Mandinka arrived in chains at the Port of Charleston and began forming a rice culture in the Carolinas and Georgia.  In the Lowcountry, the former African farmers were often left in charge of the plantations as owners sought a mosquito and malaria-free retreat further inland. Slowly these communities by the sea, especially the South Carolina Sea Islands, developed a singularly unique culture and language.  And yet there is a link here to the Caribbean islands and further way, islands in the Aegean sea.  If we return to Campbell’s painting above,  we can recognize a scene famous in the literature of another sea people.

Nothing we do is sweeter than this—

A cheerful gathering of all the people

Sitting side by side throughout the halls,

Feasting and listening to a singer of tales,

The tables filled with food and drink,

The server drawing wine from the bowl

And bringing it around to fill our cups.

For me, this is the finest thing in the world.

Odysseus, king of an island, speaks to the Phaeacians–a sea-faring people living on the island of Scheria.   Eventually, the Phaeacians will sail Odysseus back to Ithaca, but for now he states his art of living and then entertains his audience with tales of cyclops, gods, lotus-eaters and witches.  In his novel Tom Jones, Henry Fielding refers to Odysseus as having the best stomach of all the heroes in that eating poem of the Odyssey. As with the above scene on Scheria, banquets constantly arrive, disappear, and arrive again.  A typical meal in the Odyssey includes bread, meat on spits, inner organs, and wine.  Entering a home on the South Carolina Islands, you would most likely be offered okra, tomatoes, salt fish, peanut stews, and rice.

Chefs keep Gullah/Geechee foodways tradition alive like Valerie Erwin and Benjamin Davis; and by cookbook authors like Sallie Ann Robinson and Vertamae Smart-Grosvenor. Islands offer a particular alchemical laboratory for cuisine, one where imports and exports create and recreate identities and recipes.  To be an island is to find a mirror in any other sea around the world.  Food, of course, is not the only way to keep islands in contact with each other.  Derek Walcott’s Omeros pulls the sea cultures of the Aegean, Caribbean and West African coast together through Hector and Achille who work the tourists and the sea on the island of Saint Lucia, a world of canoes shaped out of cedars, white rum, egrets, lizards, and a poet

In you the seeds of grey almonds guessed a tree’s shape,

and the blind lighthouse, sensing the edge of a cape,

paused like a giant, a marble cloud in its hands,

to hurl its boulder that splashed into phosphorous

stars; then a black fisherman, his stubbled chin coarse

as a dry sea-urchin’s, hoisted his flour-sack

sail on its bamboo spar, and scanned the opening line

of our epic horizon; now I can look back

to rocks that see their own feet when light nets the waves,

as the dugouts set out with ebony captains,

since it was your light that startled our sunlit wharves

where schooners swayed idly, moored to their cold capstans.

A wind turns the harbour’s pages back to the voice

that hummed in the vase of a girl’s throat: “Omeros.’

I could quote Walcott all day, but onto cooking and thinking that’s been simmering for awhile.  Melting bacon fat, scooping out delicious bone marrow, roasting a whole suckling pig allows me to find, trace and follow stories bringing together diverse parts of the world into my kitchen, and an understanding of hands, produce, cooking techniques, and hospitality required to make an enlightened meal.  Complex stories, complex histories weave throughout posts of my blog as I learn to cook, care and know a bit more about myself and surrounding world.  Of course, all becomes grounded with my family as we sit down for a shared meal and talk.  Yet, it’s not all sun-saturated vegetables and fish. Cooking and knowing about what’s being cooked involves arguments, conflicts, appropriations, betrayals, slavery and murder.  A few days ago, I read the latest post on Michael Twitty’s blog Afroculinaria about his nomination for a Saveur Blog Award.  Twitty’s blog deserves this award and much more, but the focus of the nomination became the real meat–an open letter to the famed Southern chef Sean Brock.  Take time to read the letter and I’ll start working on my choice for a Gullah dinner, Chicken Perlo or Chicken Bog.

This whole chicken will boil then simmer for ninety minutes.  In the letter, Twitty addresses the core issues of divisions in the Charleston food scene, issues I think best summed up in this paragraph.

Yes stories of great Black historic chefs are being told, and menus are steeped in history and ingredients are telling stories about the people of the past and your menu supports Southern businesses and there are fledgling discussions on how to increase Black traffic in downtown restaurants and putting more Black cooks and culinarians out into the scene. These are the claims at least…I love David Shield’s dedication and sincerity—but even he admitted to me that my nudge and the nudges of others helped opened the minds of many to greater community engagement.  And yet–Charleston has a long way to go before it is a center of culinary justice as well as the scene that you and others have obviously worked hard to put on the map.  The frustrating thing is that it could be such a city.

Many things to note here, certainly one being an echo of disenfranchisement in communities across the country concerning African-american access to  education, food, law, and safety.  Notice Twitty’s interest in the overall Charleston community, how it can become a city truly including all.  For that to happen though, he reaches out to Sean Brock and others.  And Sean Brock is definitely the right choice.  I’ve dined at his restaurant Husk and been so moved by the care to each dish and the knowledge of the wait staff that I bought Brock’s Heritage and continued my exploration of Southern cuisine, this time through his eyes, mouth and knowledge. Whether it’s on The Mind of A Chef or Parts Unknown, Sean Brock talks with a passion for and appreciation of story and recipe.  His charting of gumbo back to West Africa and sitting down for a meal with a family for Theibou Yapp in direct line with his foodways tradition set an example of how one can cook and research at the same time. Yet, at times Michael Twitty has not received a warm response for the Charleston cooking scene, but instead a directive to keep quiet and move on.  Here’s Michael Twitty talking to Helen Hollyman in a Munchies podcast on Racial inequality in the Southern Kitchen.  He emphasizes how central Charleston was to American slavery, 4 out of 10 African-Americans can trace their history back to the Charleston slave market.  At the same time, he asserts the separateness of the Gullah culture, joking about mosquitos protected that culture by keeping the white overseers away.  A Gullah culture at the very heart of the Charleston food renaissance. 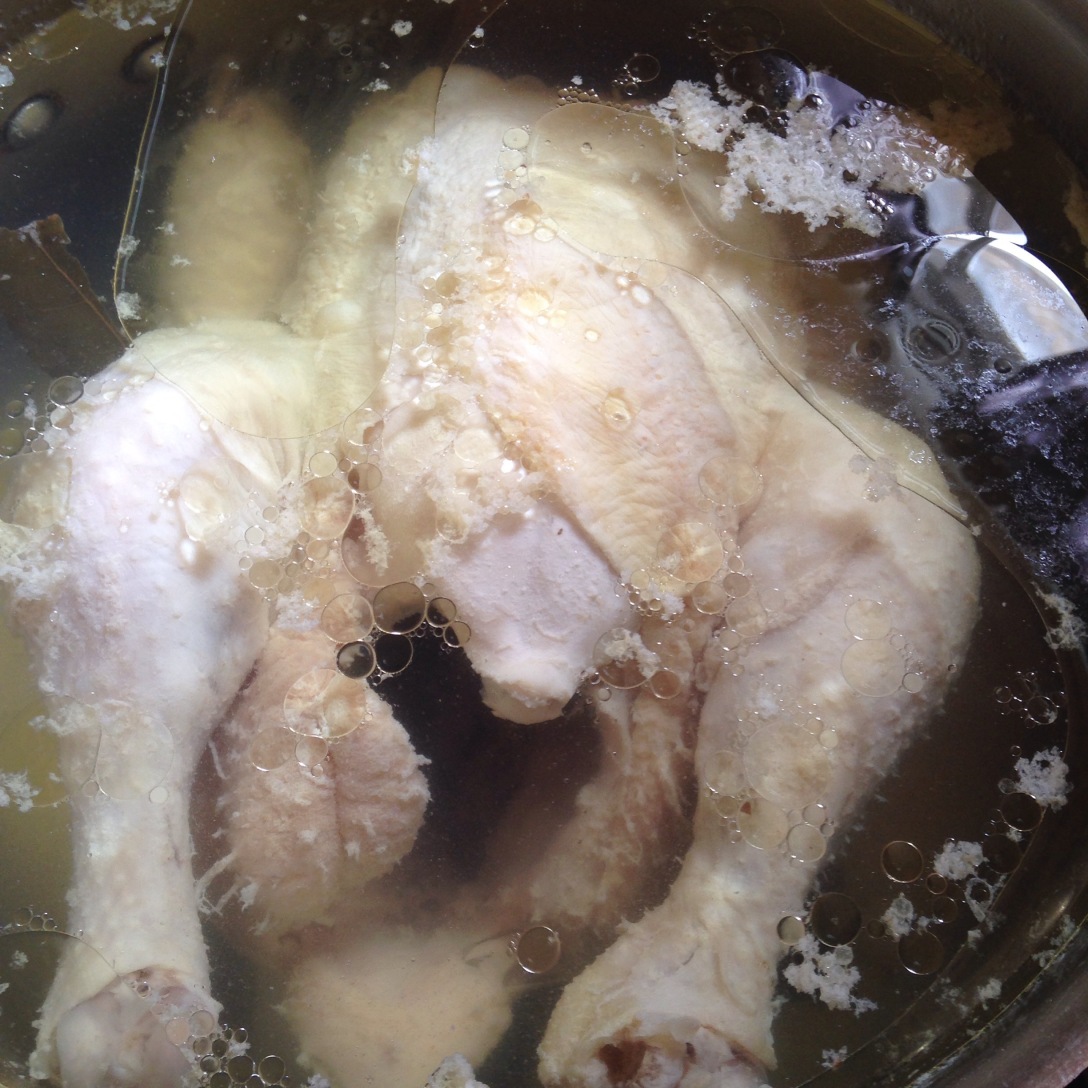 Yes, the chicken has simmered nicely creating a rich broth and delicately cooked meat. I scoop up the bird, it falls apart as I lift it out of its bath, and now it’s time for the veg. Twitty cites an article in Eater entitled, How Gullah Cuisine Has Transformed Charleston Dining.  This once isolated community now provides the basic ingredients and recipes for expensive restaurants throughout Charleston, as at the same time gentrification threatens to bury their community.

Onion, celery and okra–as essential to Gullah cooking as the sea.  I’m going to chop away and then bubble all in bacon fat.  Writing of bacon fat, I’m first going to melt said bacon fat and brown some andouille sausage.  What does it mean to share a culture that historically existed through the oppressive domination of one community over another?  If Odysseus’ art of living articulated to the Phaeacians exists, then how can it bring to the table those with such a conflicted, troubled, shared history?  I’ve blogged about the Nat Fuller Feast started after the Civil War and how Kevin Mitchell has revived in in Charleston; certainly, this is an attempt to gather all the people–but is it cheerful, is it enough?

Demian comes in the house, takes one sniff of the onions turning translucent in bacon fat and swoons for a minute.  Cooking in a home can go a long way to creating a cheerful gathering, but of course that all depends on who is invited.  What is happening in Charleston and with foodways traditions in the Lowcountry applies around the country–who has access to what food and do those who measure their history by a particular cuisine have a place at the table when it comes to opportunity? 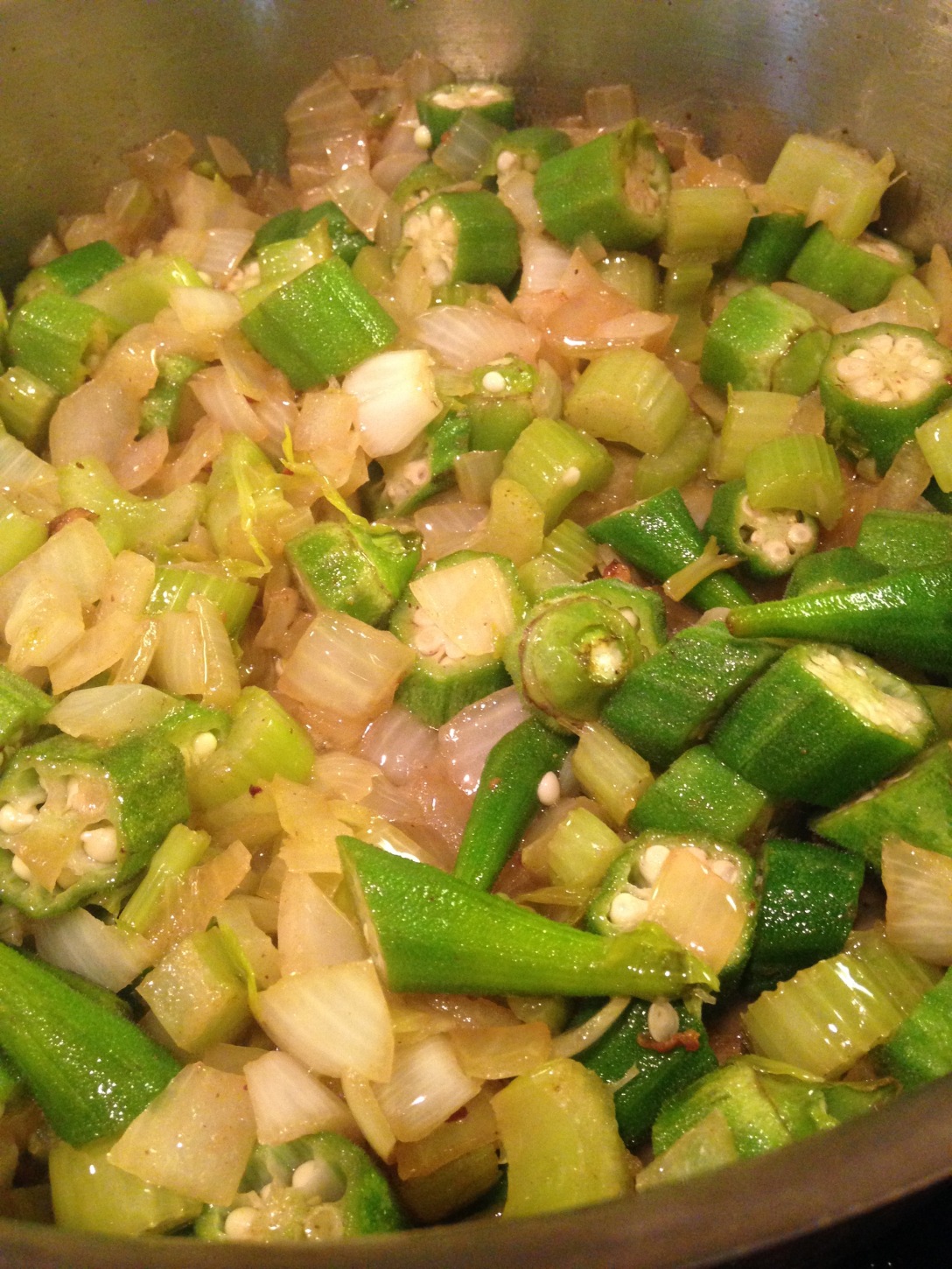 If there’s food, there’s music and dance: the ring shout.  Outside a church on Johns or Morris Island, or the Isle of Palms off the coast of South Carolina, circles of men and women step slowly, closely together, clapping hands, calling out names, worry, “She is coming . . . Get on board . . . There’s room for many more . . . .”  These steps are old, traveling back across the Atlantic like the taste of okra to Mali and Yoruba.  Enjoy Rashida Bombay and Dance Diaspora Collective.  Bon Appétit!

2 thoughts on “Gullah Cuisine: An Argument And History About Who’s in The Kitchen With A Chicken Bog.”