Again I say, I do not know what happened to H.P. Lovecraft; though, I hope he has found some peaceful oblivion far from octopi, crabs and black drums, the infernal recipe he found in the Necronomicon.  A dark cloud hangs over most of the night, but I do remember, as I’ve said, a knock on the door near midnight.  I was practicing my knife skills, which means I was sitting in the dark sharpening my chef’s knife while listening to a torrential downpour outside.  I will not deny that I know H.P. Lovecraft, even that I’m some sort of friend I suppose, but I did not expect to see him or any other human being that night.  Clouds gathered all day, dark underbellies stewing in the sky until come evening they burst upon the land, sending flood waters rushing down streets and alleys.  And still, there came a knock upon the door.  I put my knife and sharpener on the dining room table and waited. Again, a knock came.  I turned toward the door and as I approached a third knock, almost desperate, pleading echoed through the house.  I unbolted several locks, turned the doorknob, and opened into the night.  Lovecraft stood, half-stood, drenched and shivering, clutching some large object wrapped in cloth; over his shoulder he had a large, leather bag tightly strapped.  “For God’s sake, Harvey,” he said, “let me in.”  He bolted past me and I quickly closed and locked the door as a strong, cold burst of rain tried to force its way past.  He scuttled over to the fireplace and hunched in front, mumbling something incomprehensible.  “What is it Lovecraft?”  “What has brought you out on a night like this?”  His face tilted toward me and in the light of the burning logs he appeared otherworldly.  “A recipe,” he laughed.  “Only a recipe.”  Then his laughter devolved into a fit of coughing.  “Here,” I said, “let me take those things and you can–”  I didn’t have time to finish, as he pulled away, reared up and hissed “I need you to cook, nothing more, here’s the recipe . . . torn out of the Necronomicon.” 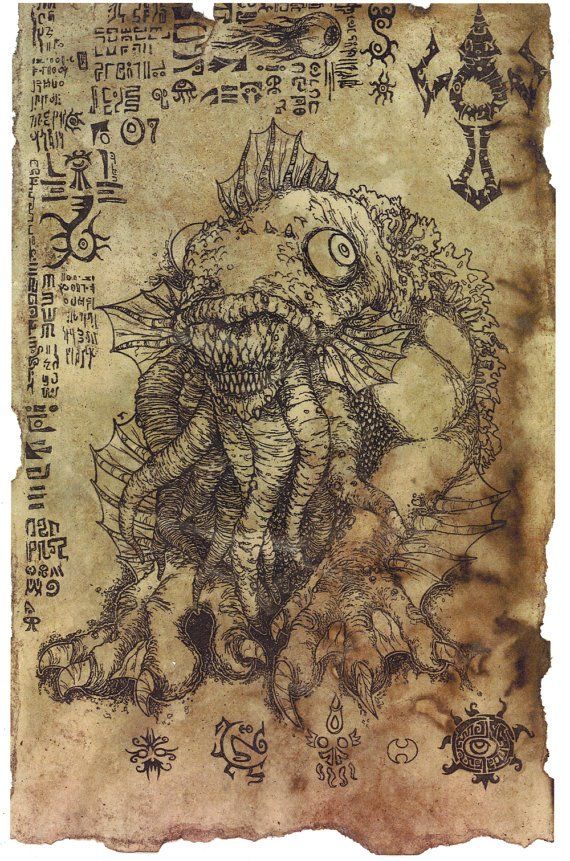 I nearly fainted when I looked at the old, ruined page, it’s texture in my hand more like skin than paper.  A combination of images and signs, which Lovecraft had taught me to decipher, took my breath and nearly my mind away.  This was no ordinary seafood recipe.  It called for a seldom seen combinations of tentacles, claws, shells and a fish head.  I thought of Cthulhu and Dagon; I thought of hellish beings from outer and inner dimensions, of unspeakable rituals conjured from the depths of the sea. Yet, I could not say no to Lovecraft, I could not say no to the recipe whose words echoed in my head, moving my arms and hands and pan.  I had to treat the cephalopod he had brought me.  These highly intelligent creatures, able to use tools and remember mazes, have wriggled through the waters of the world for almost five hundred million years.  What abominations have they witnessed? 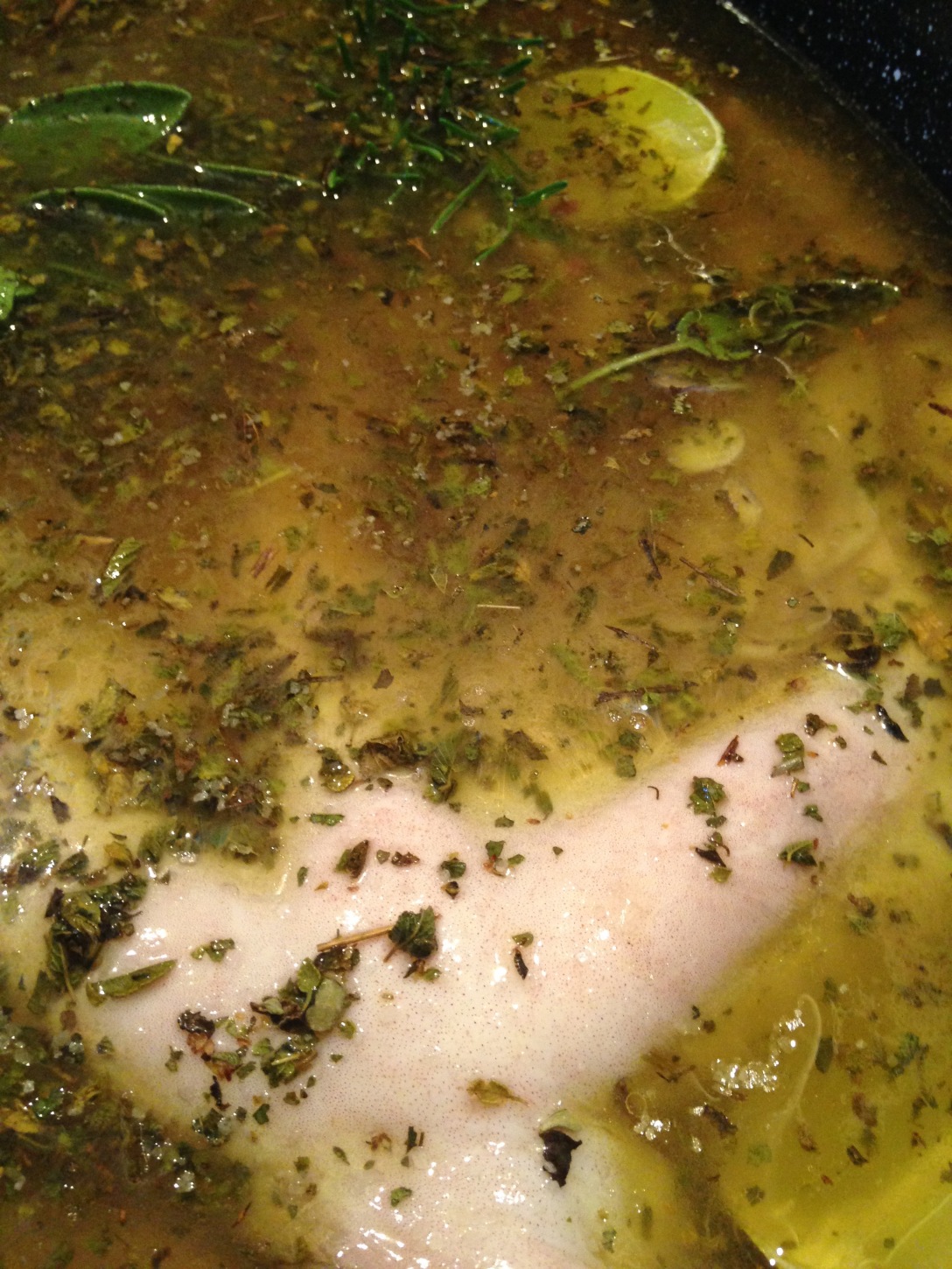 I washed the tentacled beast and submerged it in a murky, bog-like, swamp, marshland of olive oil, vinho verde, kalamata olive juice, caper liquid, pickle juice, and the broth of pickled octopus pieces.  I then placed it in the oven set to 200 degrees Fahrenheit.  Octopus to Octopus.  Forgive me! 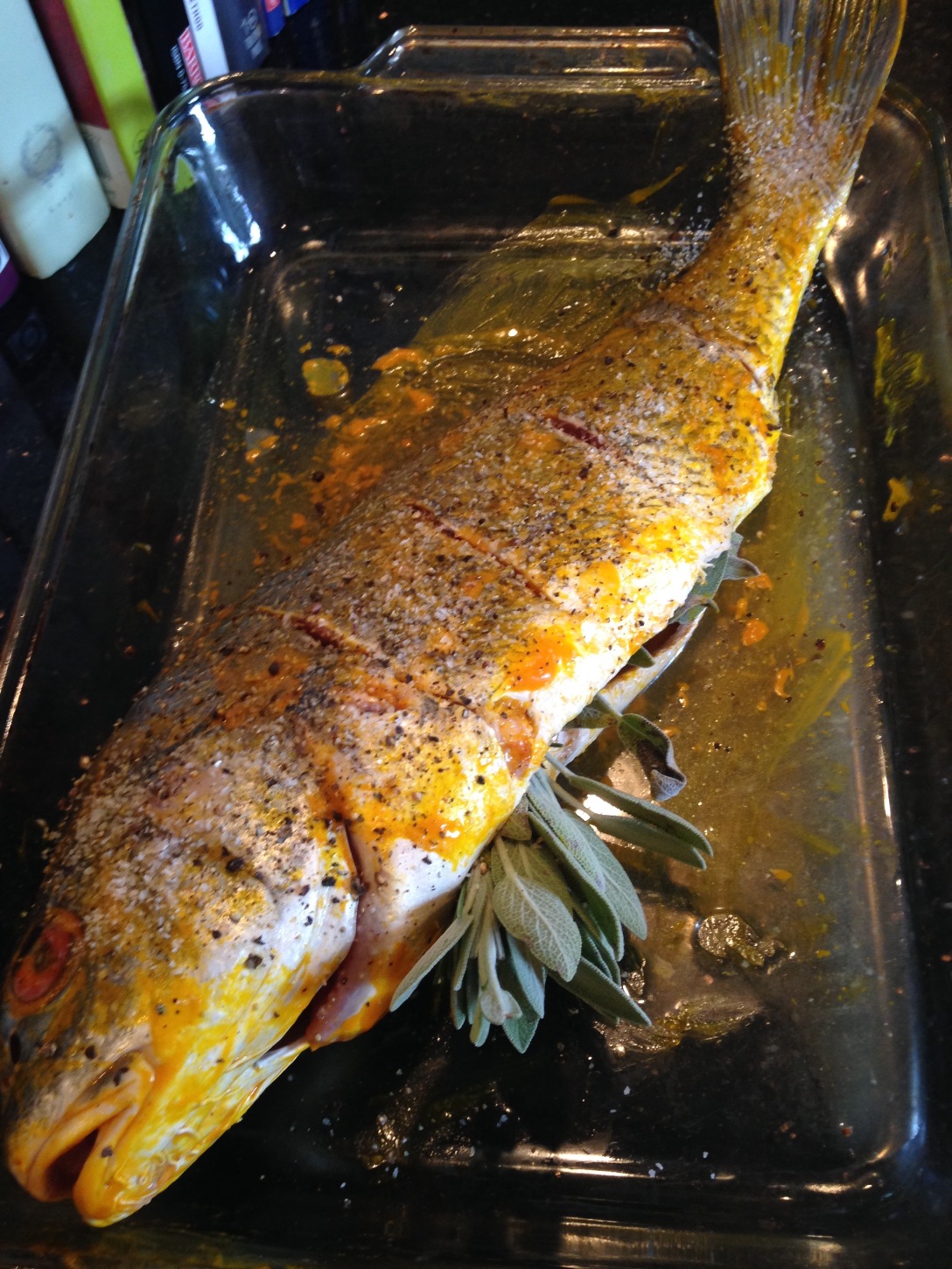 While the octopus brined and simmered for five hours, I turned to the black drum. Found in brackish water, a member of the phylum Chordata, the long evolutionary history of this darkly-clad fish stretches back over five-hundred million years–what strange wonders have they witnessed on this planet?  These beasts may grow to over one hundred pounds and their jaws crack the shells of oysters and mussels.  They swim from Nova Scotia down to Argentina, uniting the vast, ancient histories of supercontinents like Nuna and Pangaea to the eight continents today still continuing their long, ageless dance.  I coated the black drum in red palm oil and apple-cider vinegar, stuffed it with sage and rosemary and then sprinkled kosher salt and black pepper.  Time for the smoker. 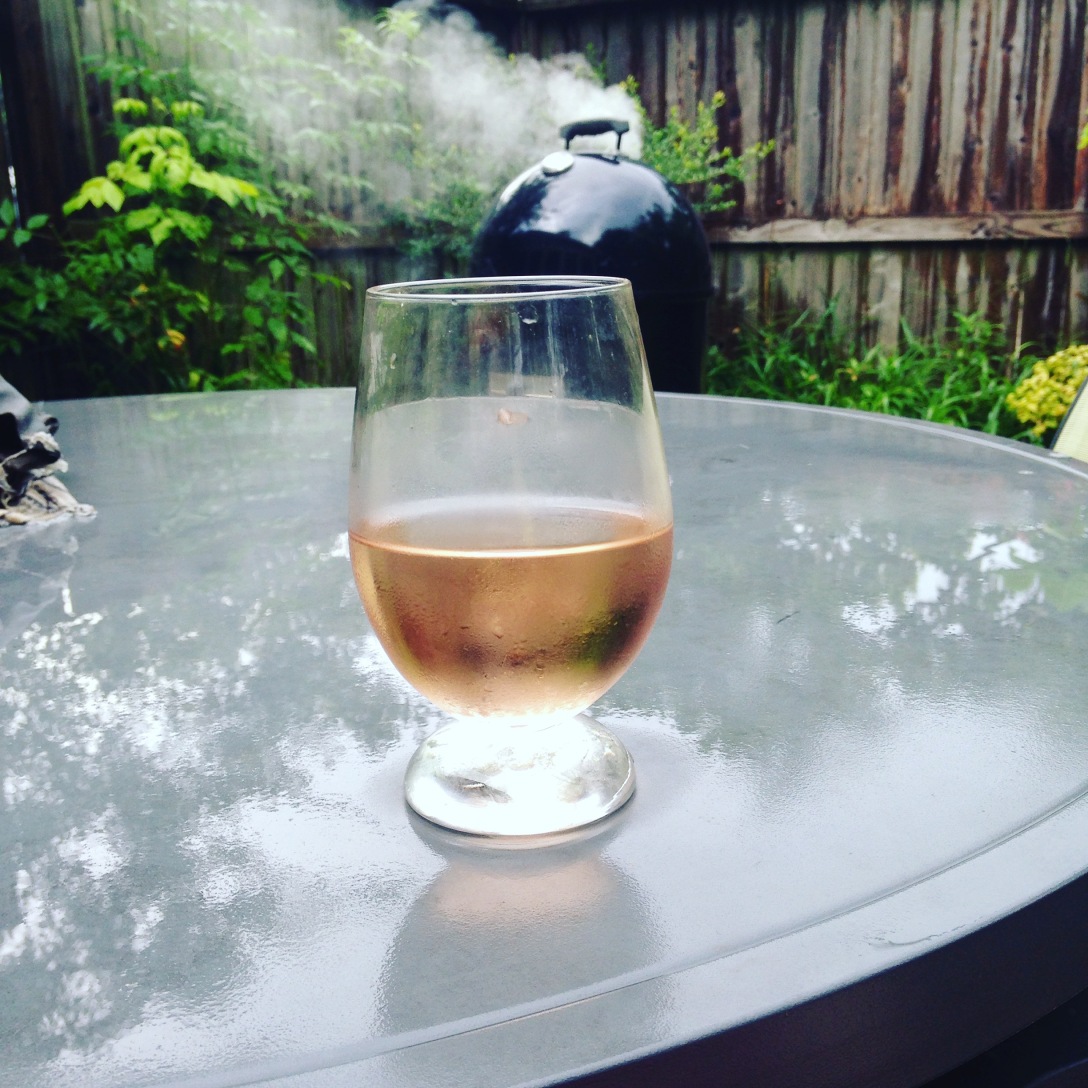 When I stepped out of my shuttered house, I realized how long I had been enclosed in secret studies, for now it was daylight, though the world was half-submerged. Dark clouds had dispersed temporarily so I quickly built my fire with apple-wood then placed the black drum inside a black cylinder and sat down to watch it slowly smoke into a delicacy.  I poured a glass of Moulin de Gassac Guilhem Rosé and watched the day age.  Hours passed as rain returned then left, creating a brackish world so it seemed I could not tell what was underwater or above.  I could hear Lovecraft inside yelling about secret cults in the Louisiana swamps, of sinister New England towns, of hellish things that rise out of the Pacific Ocean, and then disappear, of old beings from the stars who still slide and slither through forgotten cities in the wastes of Antartica.  Finally, it was time to light the grill.  I set piles of old, dried wood in the large, black bowl, lit a match and watched flames struggle upward like tentacles shooting up out of depths best not visited.  Time to grill the mussels. 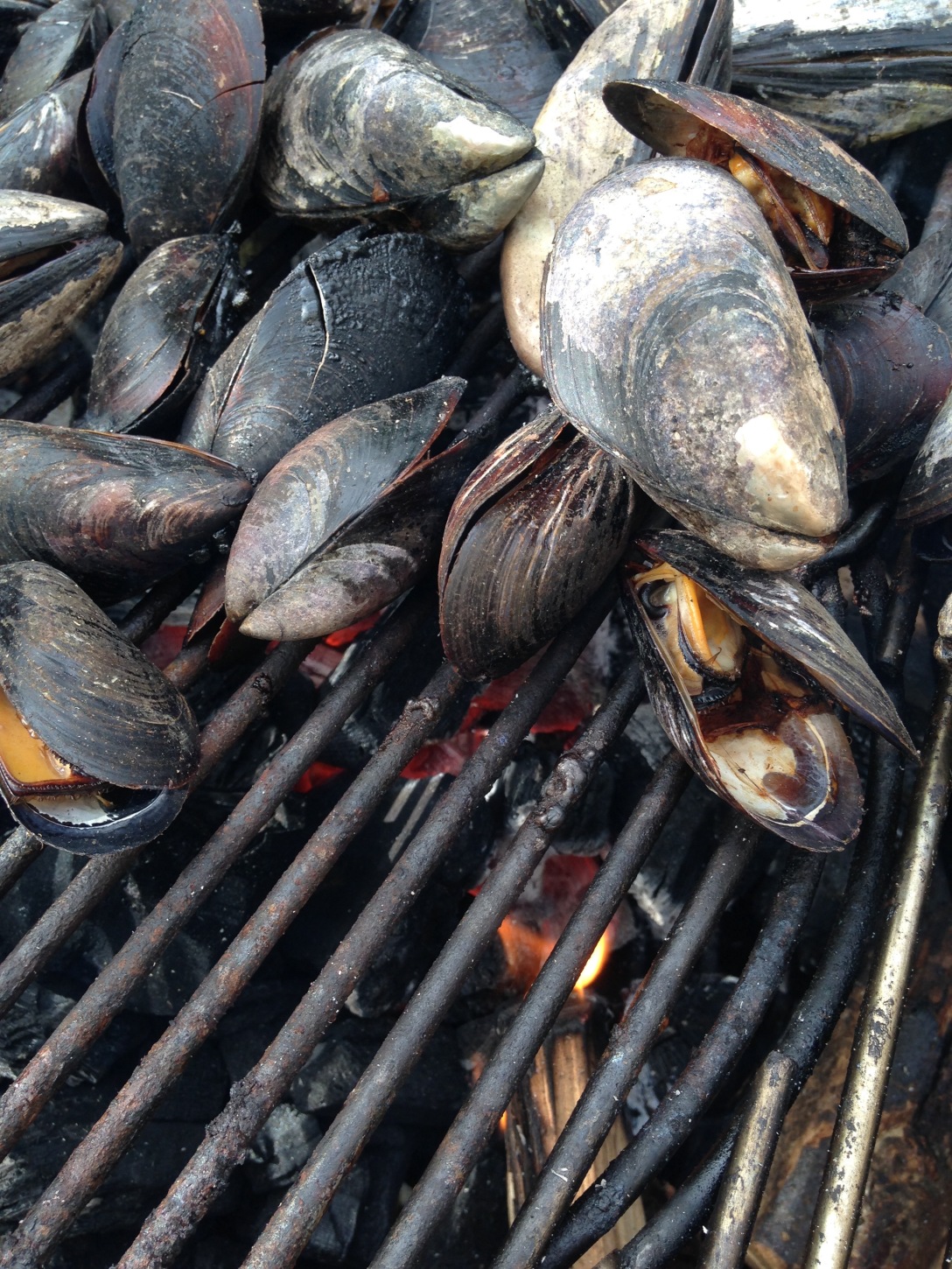 I laid out the little, shiny black mollusks and watched as they hissed, steamed, juices pouring out and evaporating on the hot grill.  With roughly eighty-five thousand species  and a history going back to the Cambrian period, what stories these little pill boxes of sweetness could tell.  I covered them and steeled myself to go back into the house.  Time to boil crab claws. 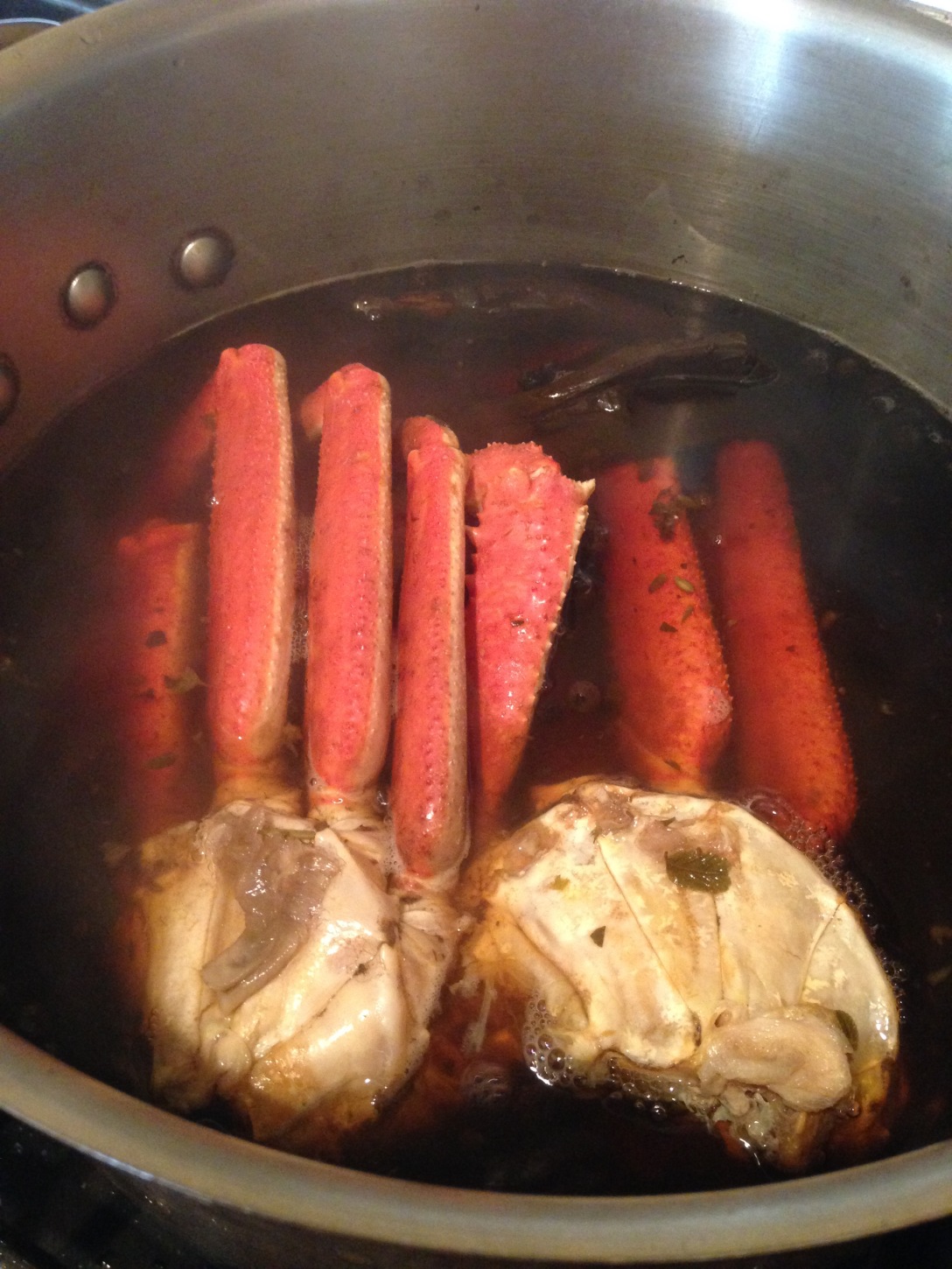 I shudder again when I remember taking these long, orangish-red fingers out of the rudely wrapped package Lovecraft had given me and immediately plunging them into boiling water.  I did not ask him what had happened to the rest of the crustacean, what eon-old rites he had performed, I simply carried out the recipe though always fearful that these over five hundred million year old glowing claws would leap out of the water and embrace my face, suffocating me to death or planning some other horrible end.  Time to return outside and check on my black drum. Before I slipped out the door, I caught a glimpse of my guest huddled begin the upright piano, chuckling with malicious intent. 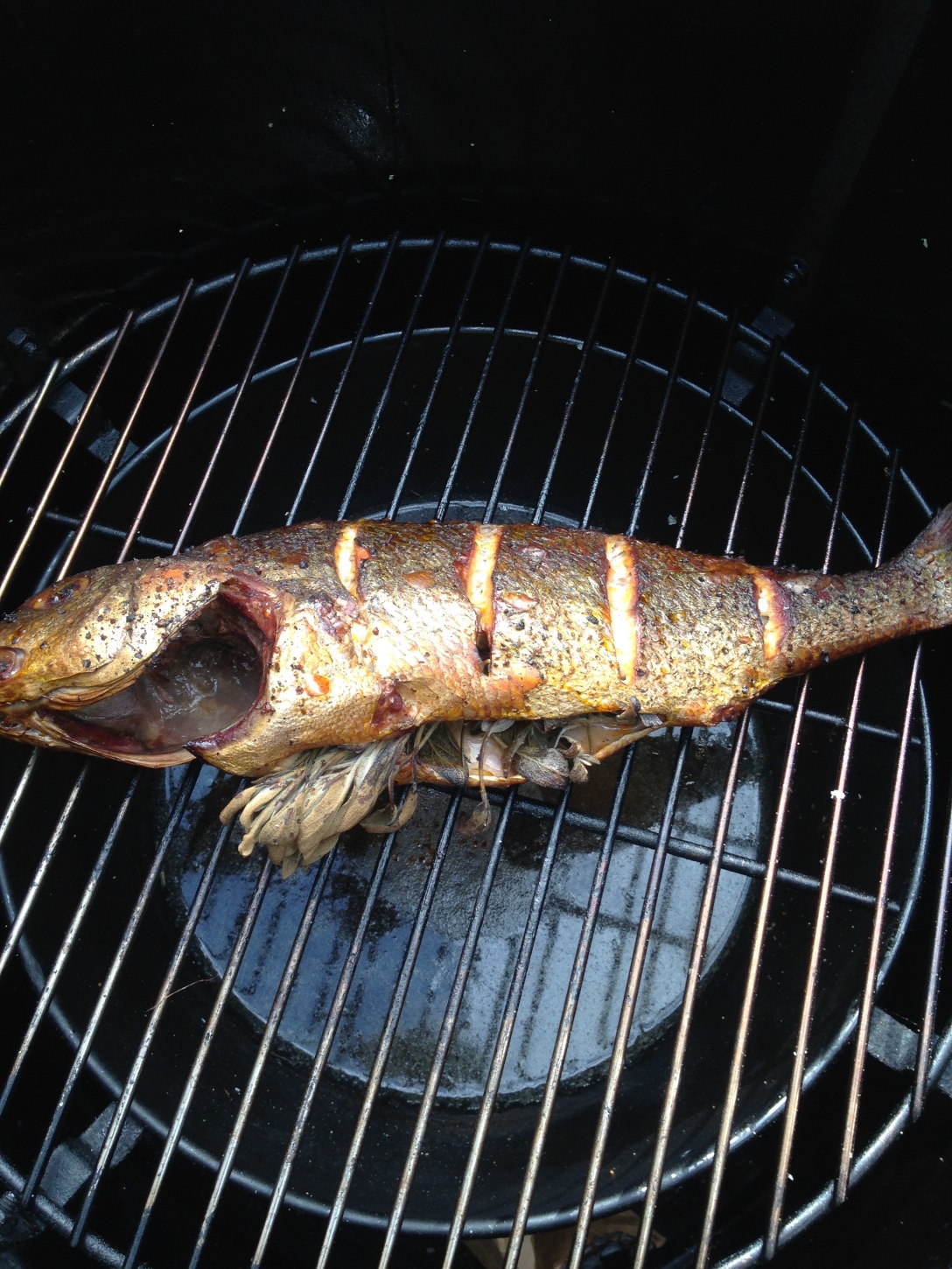 Ah, the black drum is ready.  When I lift it out of the smoker the Pogonias cromis fell apart into three distinct pieces–head, torso and tail–an arrangement that I sensed spoke to my dinner companion’s nefarious purposes.  The white meat glowed and set against the golden-brown skin I felt a deep satisfaction, though I realized that by the end of the evening I might regret ever agreeing to this meal.  I brought  the black drum inside in a baking dish and set it in the oven, and removed the octopus  I took the octopus, lifted it out and setting it on a plate and returned to the grill. Before I could exit, I saw that Lovecraft was now perched on top of the upright piano, smiling as though he was a cannibal sitting on a mountain of human bones. 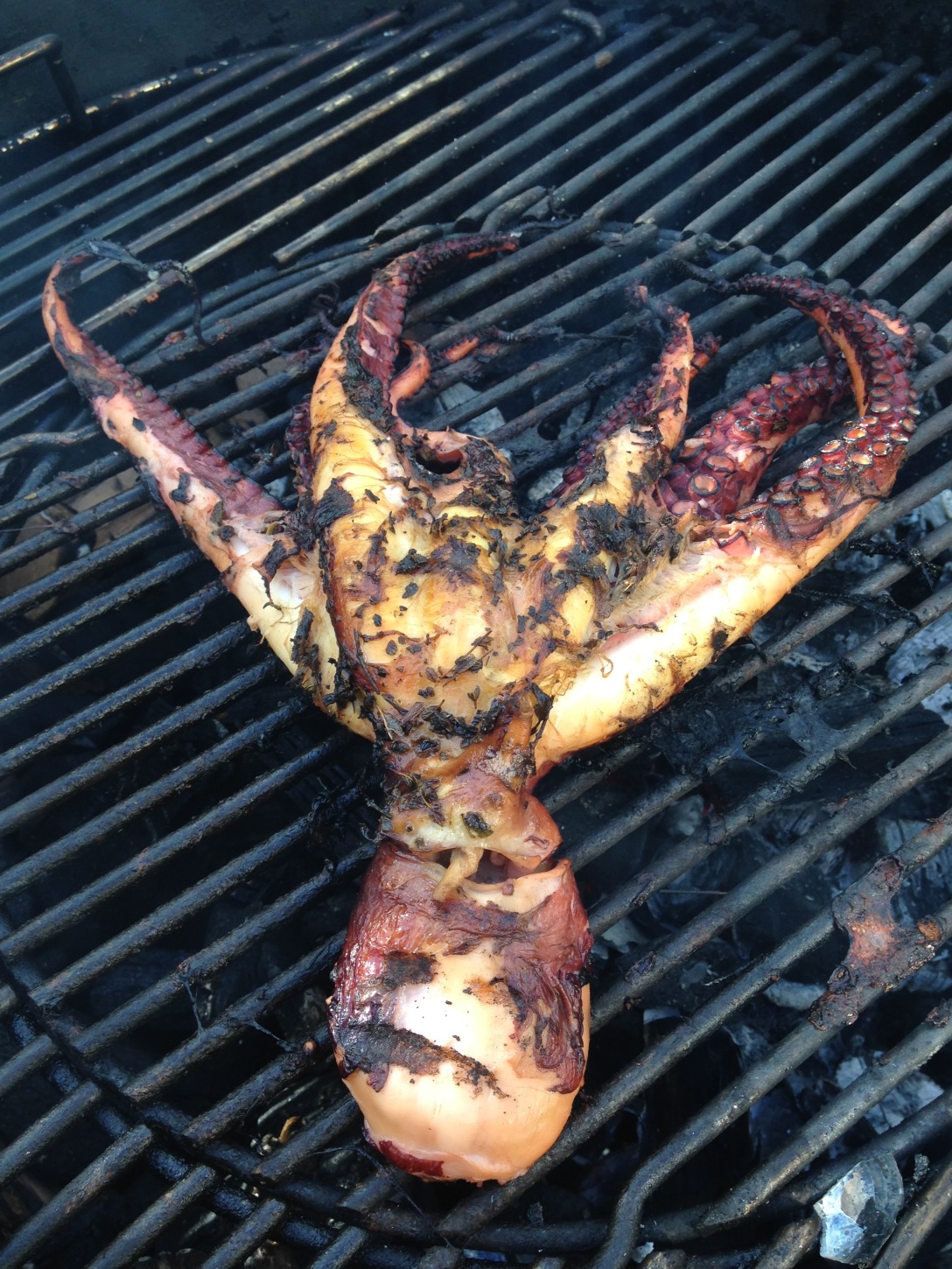 I scooped off the mussels, now a darker black with shells beginning to crack, the meat inside a glowing sunset and put the octopus on the middle of the grill.  I brought the muscles in, covered them with a cloth and opened a bottle of Futurosa Piemonte Rosato, then scanned the room for Lovecraft–nowhere.  Had he left?  Was I rid of him once and for all?  Of course not, I thought.  And then all fire and smoke came to an end as I laid out the cooked spoils of my friend’s packages.

I must admit I felt a satisfaction looking at the spread.  From the order Octopoda to the sub order Pleocyemata  to the family Sciaenidae and to the class Bivalve, I had brined, smoked, boiled and grilled a dinner of deep waters.  I immediately turned to plating, and with the determination of a painter set the black dum’s tail with all its lucious meat in the middle, surrounding it on either side with a claw and tentacle.  I lined the left side of the plate with six mussels and then filled the bottom right corner with a leafy salad (earlier prepared by my wife who upon seeing our New England visitor in the house, shouted that she’d be back in a day or two and that “he” should definiltey be gone!).  I looked at my fiendish work with pleasure and called for Lovecraft. 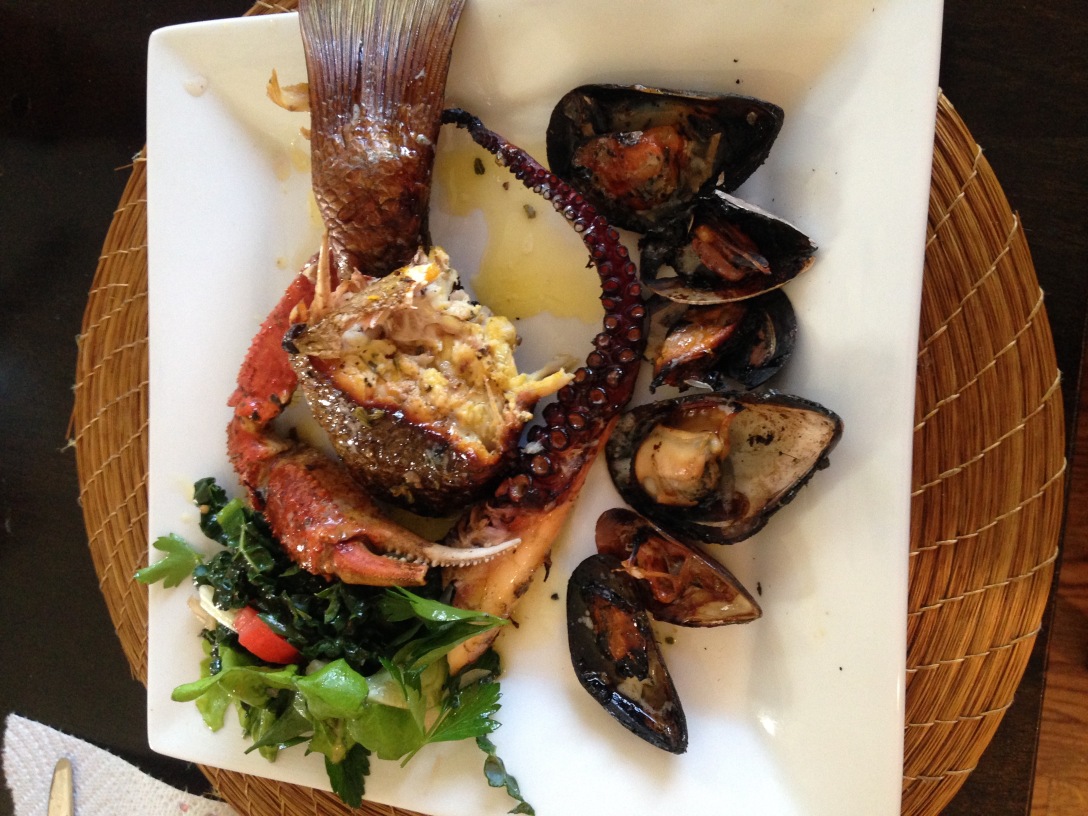 I turned and almost fainted.  Lovecraft scuttled across the floor toward the dining table like a crab with his head bobbing from side to side, gasping for air like a fish out of water, and I wasn’t sure, but I thought I saw long, writing appendages twist and turn out of his belly.  He plopped himself on a chair, turned to me, croaking in a language I did not understand, and then promptly began to feed.  I won’t call it eating for it had nothing of the etiquette and grace upright animals possess when they use knife and fork and napkin.  In a few minutes he finished, then looked up and spit out words sounding like “You are what you eat,” then quickly flopped off the table and scuttled out an open window and that was the last I ever saw of Lovecraft, or hope to see.  I remember, as if in a dream, assembling my plate with a head instead of a tail, and sitting properly, with my back not slouched, I ate my well-prepared dinner.  It was then, in the middle of the mouthful, thinking of my-never-to-be-seen-again traveler of eldritch worlds, I recognized the source.  Aphorism number four from Jean-Anthelme Brillat-Savarin’s The Physiology of Taste: Tell me what you eat: I will tell you what you are.  Bon Appétit!