And so it is.  A time of honoring agricultural deities, gathering to brave darkness, exchanging tokens of friendship, banquet-style eating of copious amounts of the gods’ riches, and drinking . . . drinking and drinking. 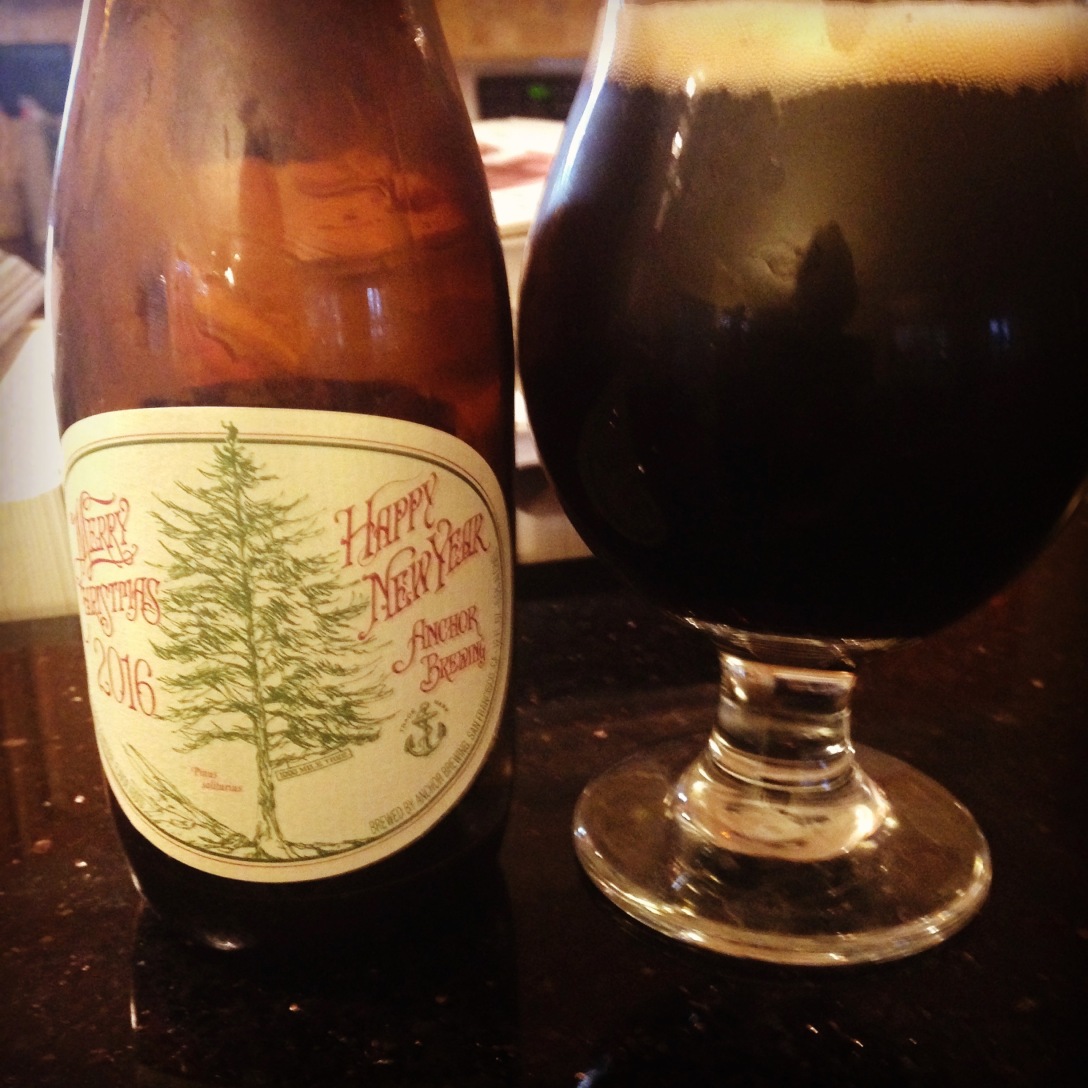 For twenty years I’ve started Saturnalia celebrations with the seasonal Anchor Brewing Christmas Ale, 2016 will be no different.  Saturnalia took up a full week in Roman times from December 17 to 23 in the Julian calendar (give a take a decrease of one or three days, sometimes outright elimination, and then return, let’s say from Cicero in the Senate to Macrobious on the eve of the Western Empire’s speedy decline in the fifth century CE) celebrating the god of the Golden Age of bounty and plenty, with his oldest aspects as a god of creation and destruction–including human sacrifice. But cutting throats is not our focus (tonight), ours is the celebration through food and drink of planting and harvesting, of waiting through winters months for the return of the sun’s glory.

And not only is the tilling of the fields more ancient — it is more noble. It was therefore not without reason that our ancestors tried to entice their citizens back from city to the country; for in time of peace they were fed by the country Romans, and in time of war aided by them.  It was also not without reason that they called the same earth “mother” and “Ceres,” and thought that those who tilled her lived a pious and useful life, and that they were the only survivors of the stock of King Saturnus. (Varro, On Agriculture) 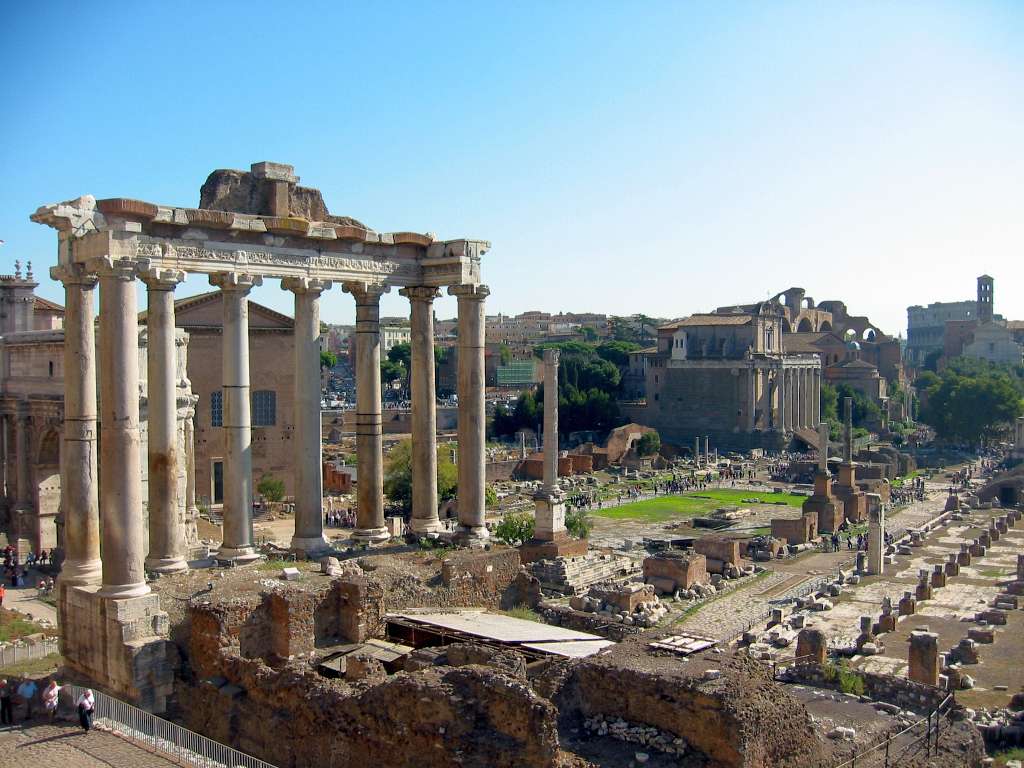 The Temple of Saturn grounded the Saturnalia in Rome.  Wool around the feet of an ivory cult statue was removed, and the god “liberated:” an emphasis on the Saturnalia as a week overturning social norms, similar to many carnival traditions, when masters served slaves, colorful costumes replaced togas, gambling reigned, cups never failed for wine, figs and nuts were in abundance along with honey cakes and roast boar, and did I mention partying.

Now, while the knights and the lordly senators delight in the festive robe, and the cap of liberty is assumed by our Jupiter;  and while the slave, as he rattles the dice-box, has no fear of the Aedile, seeing that the ponds are so nearly frozen, learn alternately what is allotted to the rich and to the poor. Let each make suitable presents to his friends. That these contributions of mine are follies and trifles, and even worse, who does not know? or who denies what is so evident? But what can I do better, Saturn, on these days of pleasure, which your son himself has consecrated to you in compensation for the heaven from which he ejected you? Would you have me write of Thebes, or of Troy, or of the crimes of Mycenae? You reply, “Play with nuts.”  (Martial, Epigrams)

The Gulf Coast and the shores of the Mediterranean Sea share a humid subtropical climate, a collection of recipes featuring the abundance of seafood, carnival festivals, and plenty of  bright, direct sunlight anytime of the year.  So a Southern Saturnalia fits the menu.  Edna Lewis in her wonderful collection of recipes The Taste of Country Cooking, divides the year into seasons and for Christmas writes about the particular foodways unique to a Virginia winter.

There was a special excitement in the kitchens, as many of the things we prepared were foods we tasted only at Christmas.  This was the only time in the year when we had oranges, almonds, Brazil nuts, and raisins that came in clusters.  And although we were miles from the sea, at Christmas one of the treats we always looked forward to was oysters.  The oysters were delivered to Lahore’s in barrels on Christmas Eve day , and late on Christmas Eve we would climb the steps over the pasture fence and walk along the path through the woods to the store, would fill some of our pails with oysters.  (Lewis, 196)

Well then, I know I’ll have Oyster Stew and Corn Bread on the table, but what else. Recently, when in North Carolina my sister Janis took me to a book signing for Raleigh restaurateur Ashley Christensen’s new cookbook Poole’s based on her diner of the same name.  Many wonderful recipes reside within, but one in particular caught my eye: Fried Soft Shells and Chow Chow.  Of course, I needed greens, so I also gathered a recipe from Poole’s for a Wilted Winter Greens Salad.  Let’s begin. 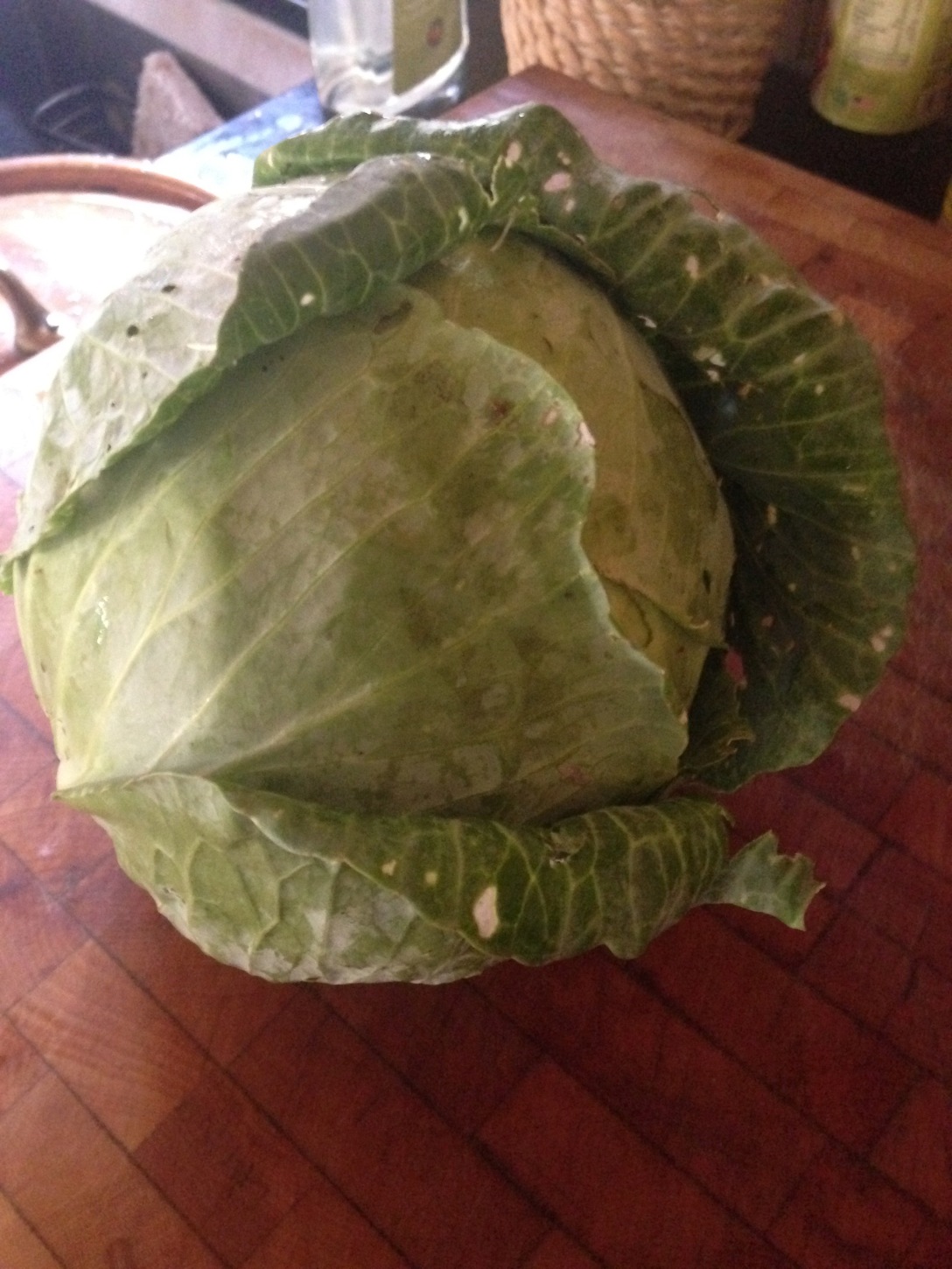 Time for chow chow.  My first time with this recipe I rely on Poole’s approach.  Two pounds of chopped green cabbage, along with one and half pounds of orange and yellow bell peppers cored, seeded and diced, one small yellow onion diced, and the requisite four teaspoons of sea salt.  For the brine I boil one and half cups of cider vinegar, half cup sugar, one and a half teaspoons (actually I used a handful) ground turmeric, handfuls of celery seeds, cayenne pepper and sea salt.

Time for oysters.  These beauties arrive from the Texas Gulf Coast and following Lewis’ recipe I wash and drain them.

I melt a couple tablespoons of butter, gently toss in the oysters, stir until they curl, then scald milk (my approach has the pan on high heat then the milk poured in) and add to the butter and oysters.

Lewis calls for the heavy cream to reduce separately, however I’m going to let the pot simmer for awhile, so I pour in one cup of heavy cream and over the next few hours add another cup to maintain a requisite amount of stew.  I shake in decent amounts of cayenne, nutmeg, black pepper and salt.  Ah, the aroma. 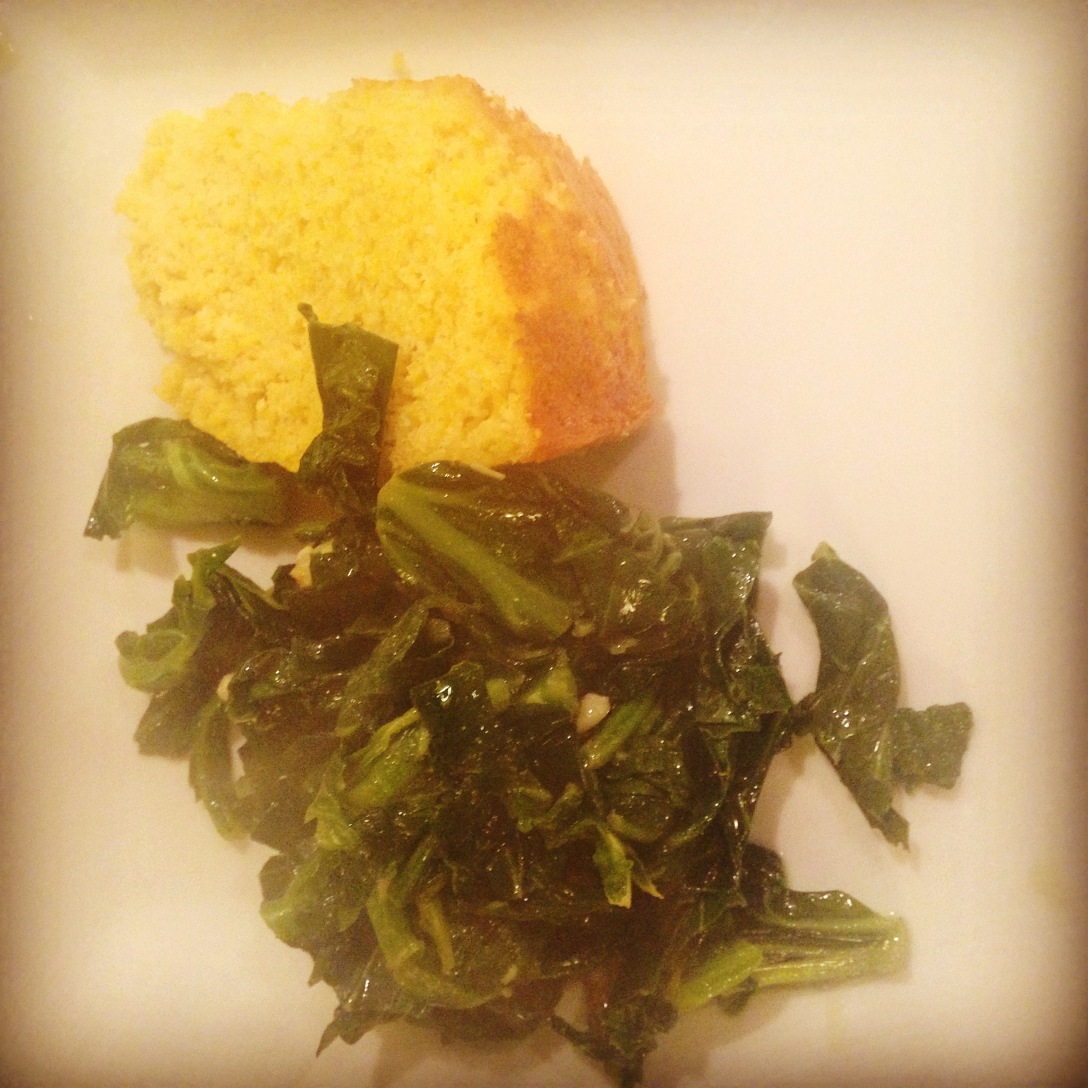 Following Poole’s recipe for Wilted Greens and Olive Oil and Garlic, and adjusting on the fly: generous pour of vegetable oil, plant of garlic cloves, a shake or two of red pepper flakes, a couple pounds of collard, chard, kale and mustard greens, sea salt, tablespoon of butter, nice pour of olive oil and a squeeze of lemon juice.

Serving time.  I decide at the last minute to reverse the original menu (so much like the Saturnalia) and serve wilted greens and cornbread, with a bowl of oyster stew first.

As the guests eat, I break out the soft shell crabs. 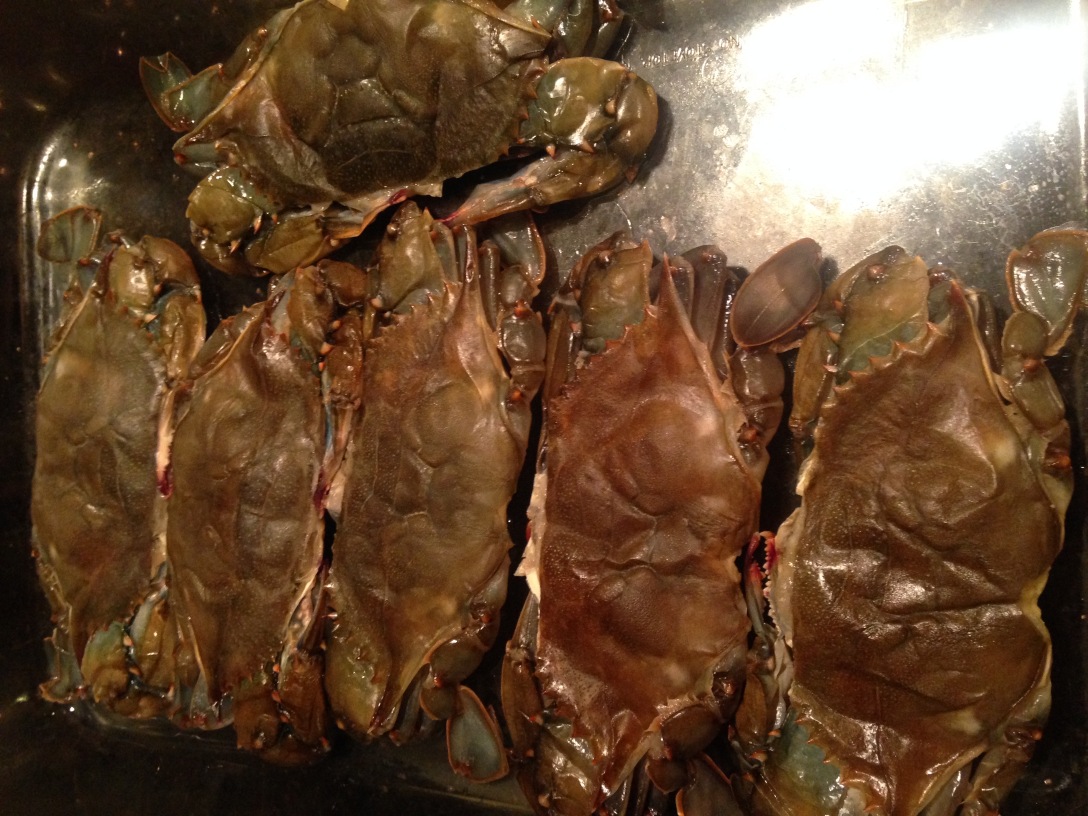 I bathe them in buttermilk, toss in flour, and off they go to a very hot pot of vegetable oil.  Ah, frying! 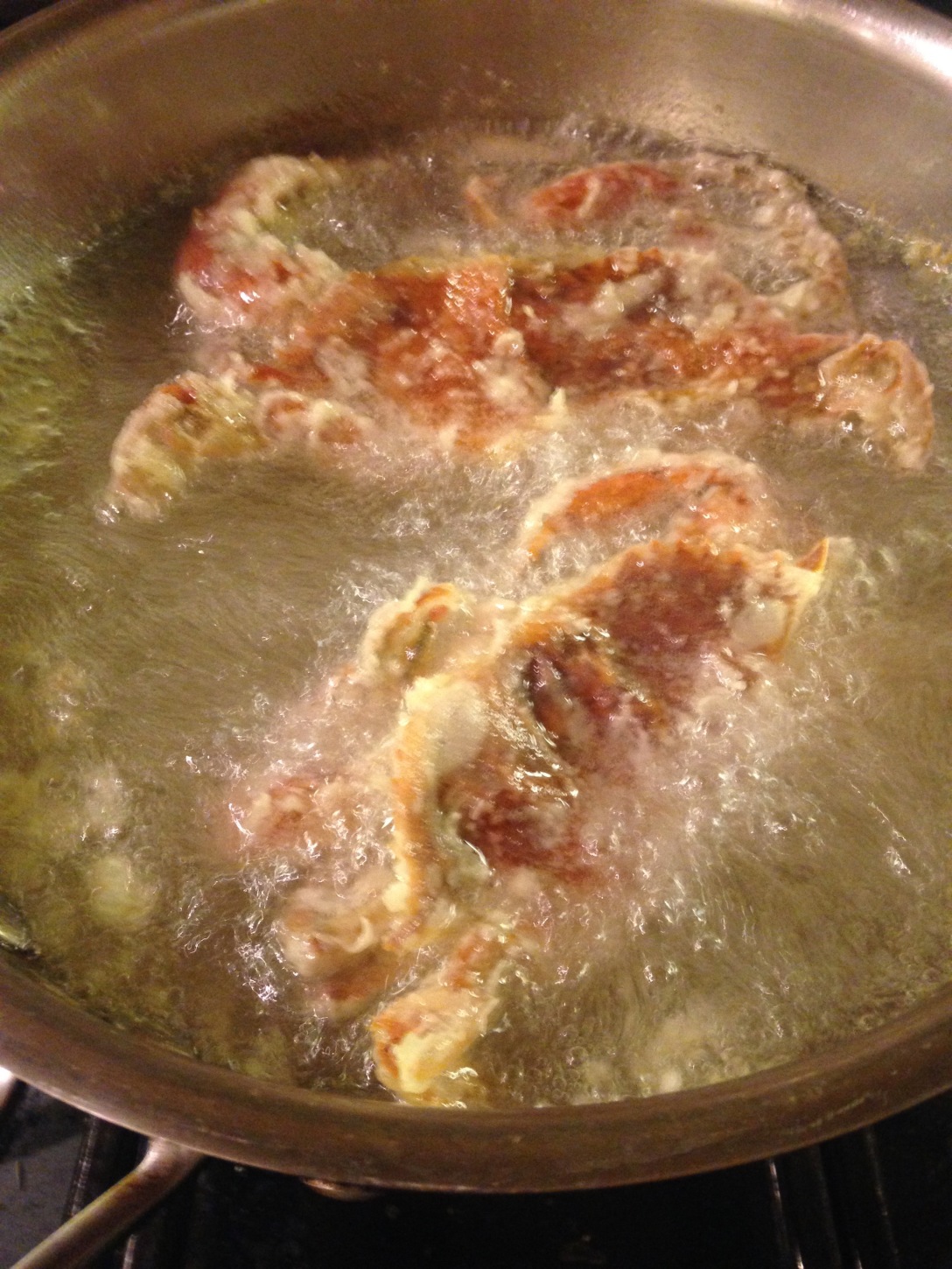 Then right to the plates recently holding greens and cornbread, I place chow chow and the fried soft shell crab.  Delicious! 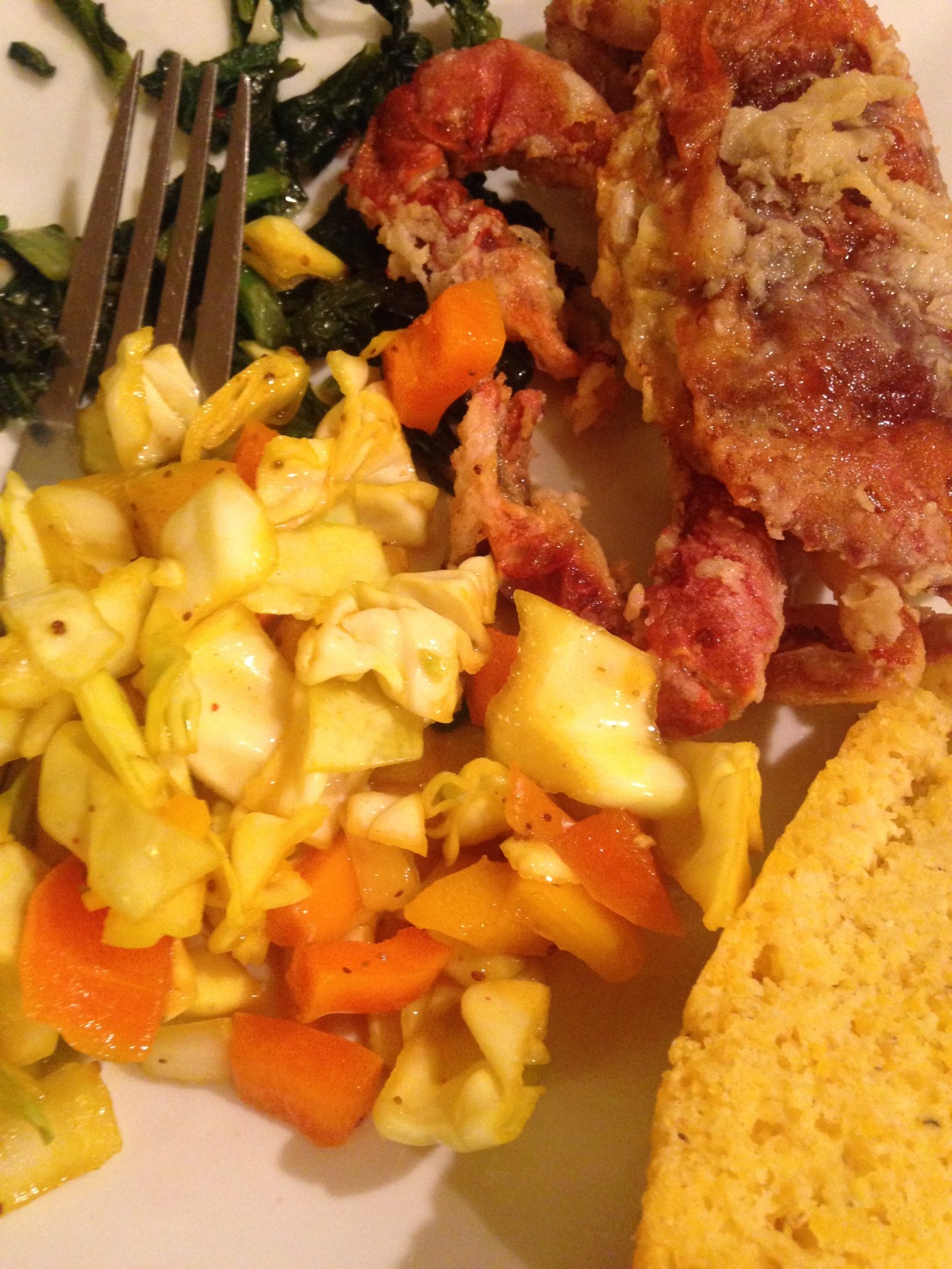 And what of the guests? Demian (note Yugioh card box) Gabriela, and Chris smile into the night. 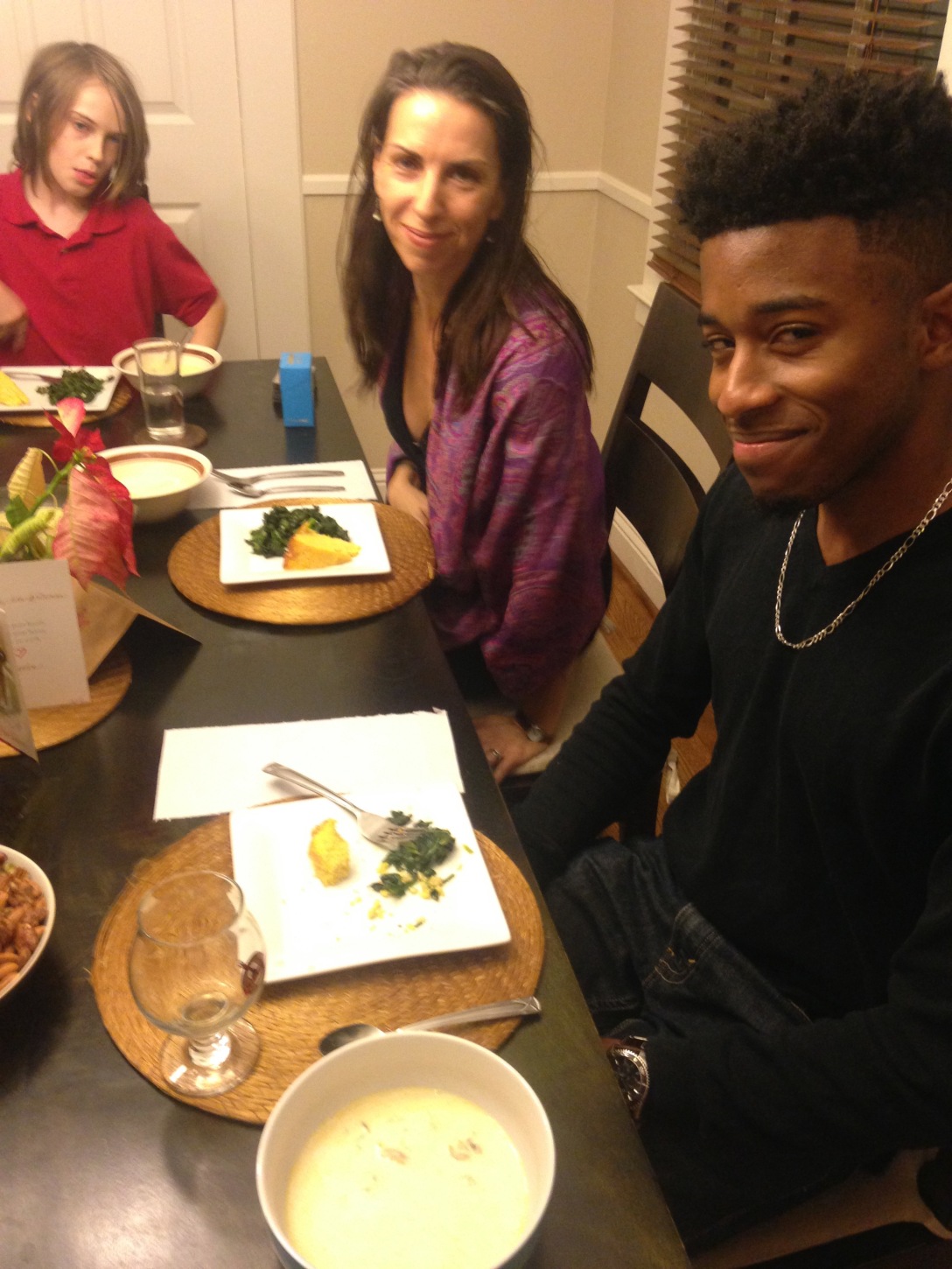 And the happy young family–perfect to have me as the old man and Chanelle and Chris’ baby Julian as the new year.

2 thoughts on “A Southern Saturnalia”