We’ve shopped at the farmer’s market, so now it’s time to cook.  Let’s take a look at my beloved fish, meu namorado. 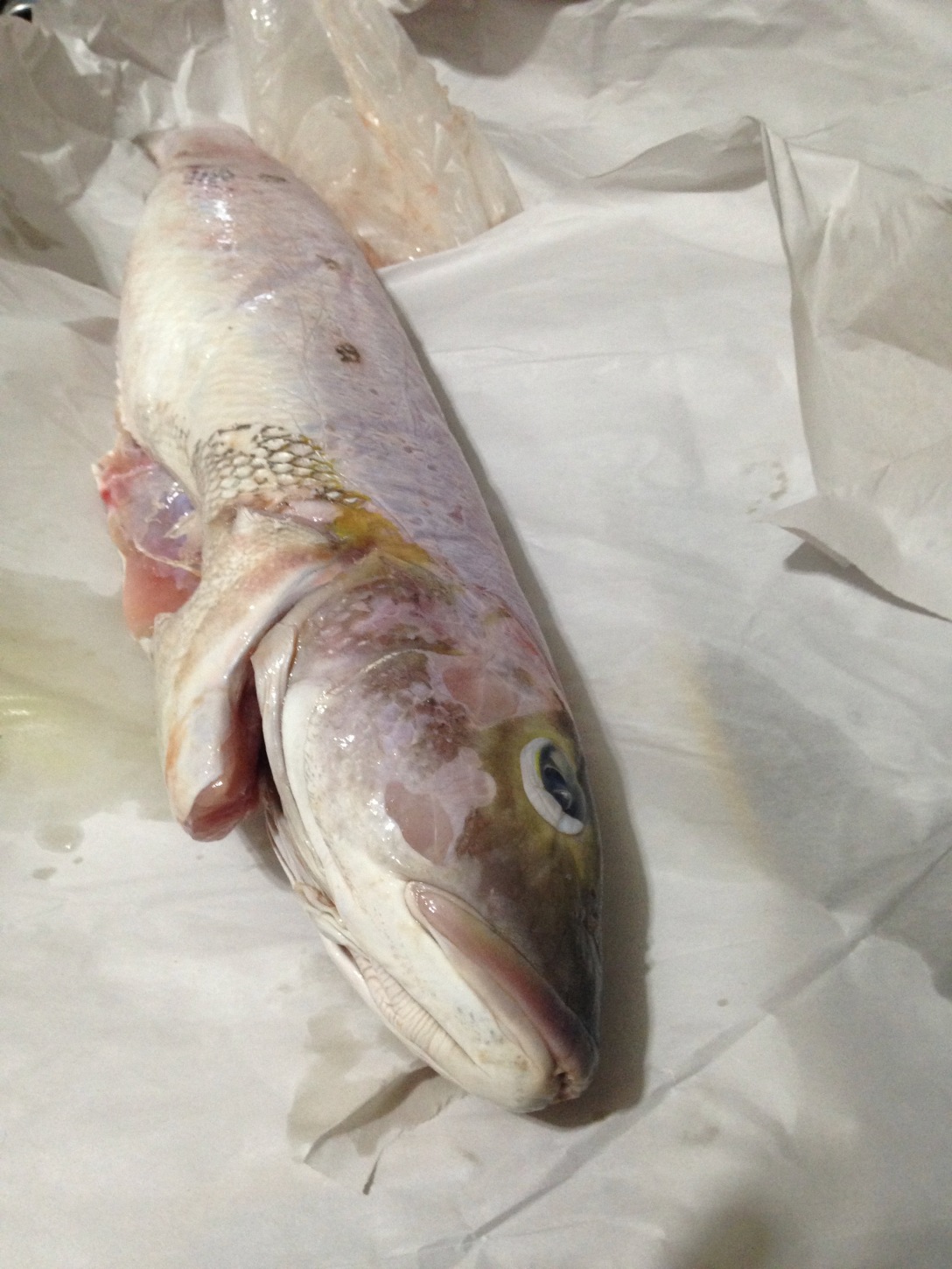 Oh, he’s quite a catch.  Scaled, gutted and cleaned.  Let’s take a look at the shrimp. 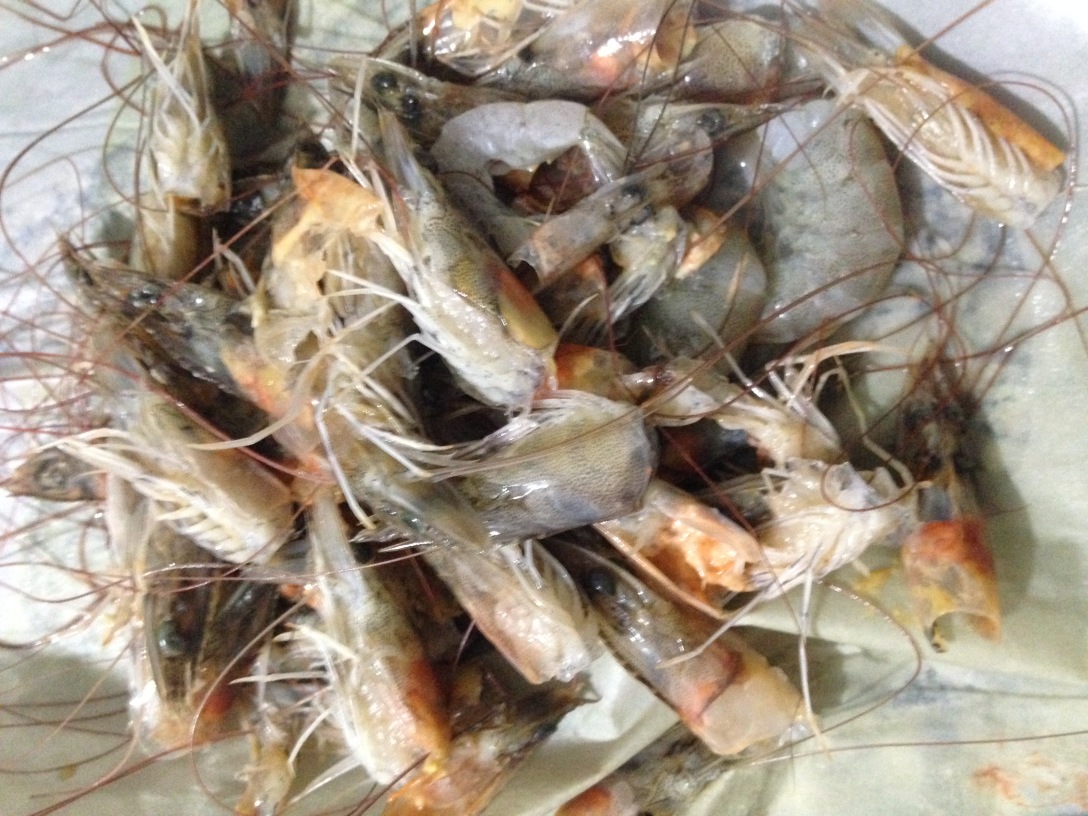 Lovely.  I cut the namorado into thick steaks, saving head and tail for a stock.  I remove head and shells from the shrimp as well for stock.  Before I start cooking though, I have to pour out the requisite libation to the gods of my hearth: Maní, Iemanjá, Mouras encantadas, Aziza, Oya, and Clarice Lispector.

If you dear reader, ever dig far enough back into mythology, you will find an ocean and a woman giving birth, guiding her children through sorrows, guarding treasure, swirling storms and carrying us into death.   I’m not going to cut a hole in the floor and pour in wine and honey, much better, I pour cachaça into a glass.  Sugarcane has to be one of the great grasses of the world, giving us sugar, falernum, molasses, rum, and of course cachaça.  This particular offering from Conceição do Mato Dentro highlights its distillation in alembic stills, which takes us back to those old alchemists looking for the philosopher’s  stone.  After distillation the spirit is aged in barrels of jequitibá rosa and jatobá wood.  I taste banana, citrus, syrup all with that slight hint of rum.  Perfect time to take in some words as I sip and sip and sip.  I read Manifesto of the City (“O manifesto da cidade”), The Dinner (“O Jantar”), and Two Stories My Way (“Das historias a men modo”) by Clarice Lispector.

I reach out my hand and without sadness trace from afar the curves of the stone. Something still escapes the compass rose.  Something has hardened in the steel arrow that points toward–Another city.

When I stared at him again, he was immersed in the full glory of his dinner, chewing with his mouth open, running his tongue over his teeth, his gaze fixed on the ceiling light.  I was just about to slice my meat again, when I saw him stop entirely.

He came from a good family, though he didn’t like wine.  Yet the best vines around were his.  He didn’t like any kind of wine, and searched in vain for the wine that would free him from the curse of not loving the excellence of something excellent.

I cut the namorado into large steaks and coat in olive oil, white vinegar, lime juice, and a garlic butter, then let rest for an hour. 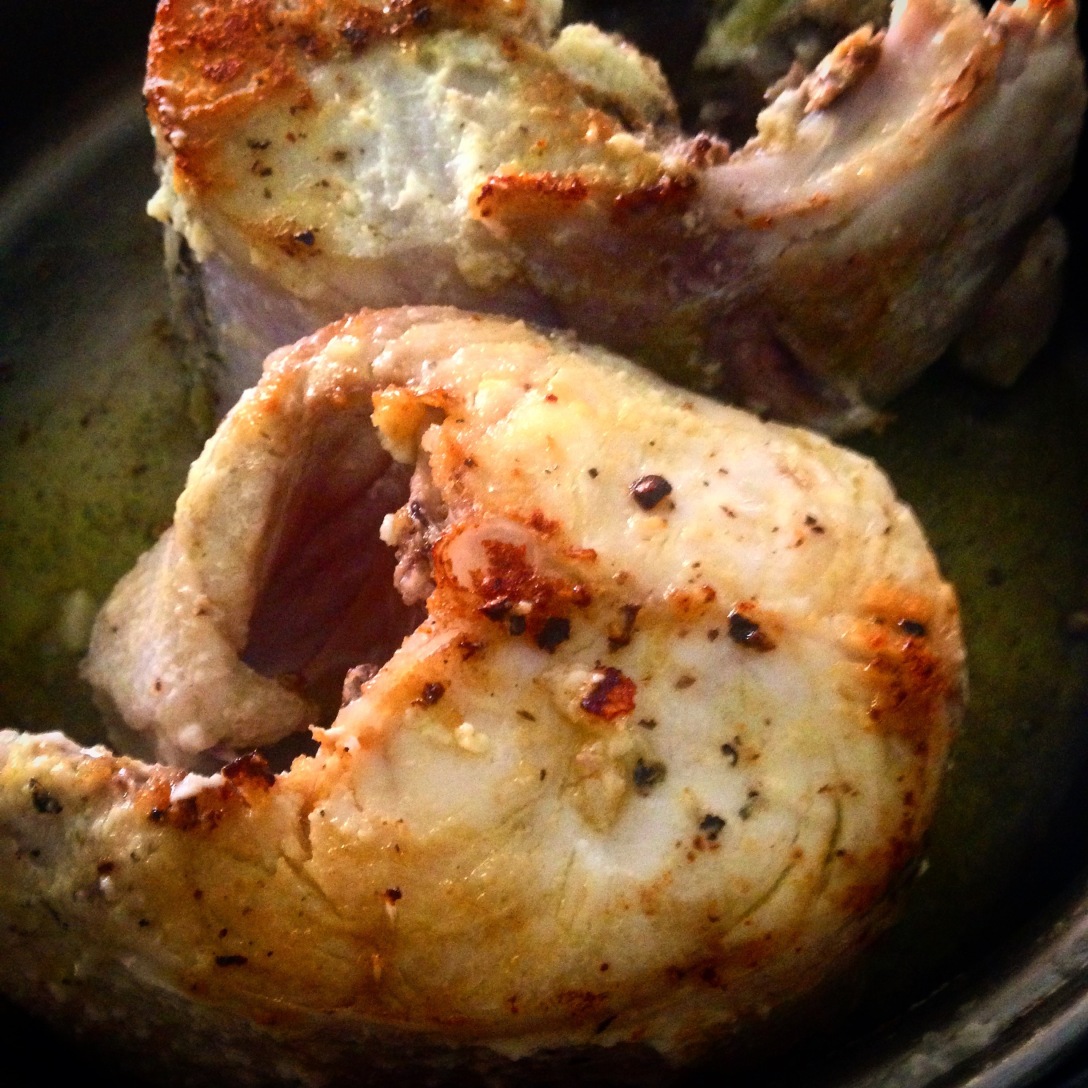 Now into a hot pan of olive oil and seared on all sides.  I put “my sweetheart” in the oven at a low temperature and let slowly bake as I prepare the Bahian sauce. 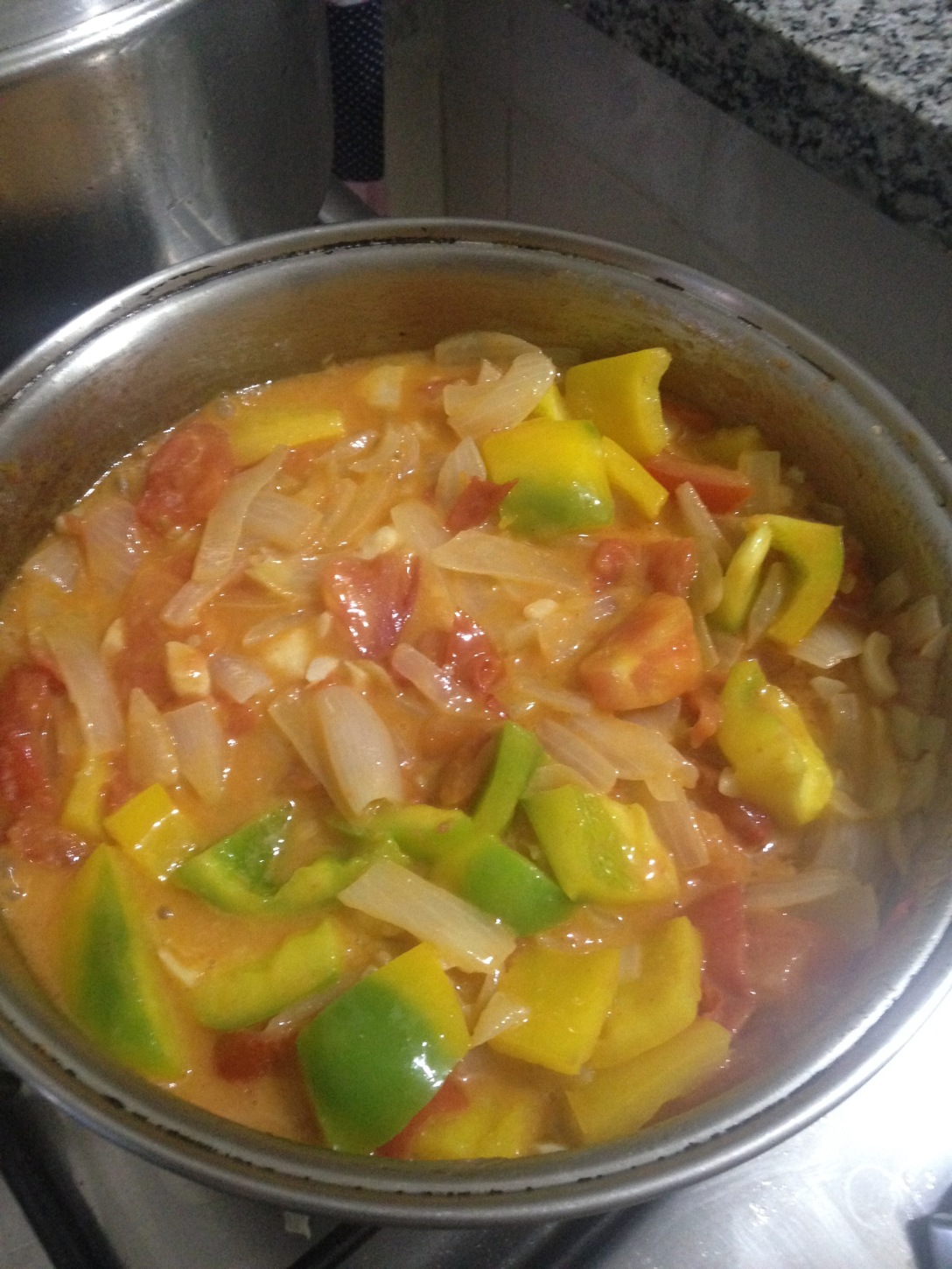 Following directions for Camarão à Baiana in the preeminent Brazilian cookbook Dona Benta, I pour olive oil in a hot pan, add a couple tablespoons of butter, then onion and garlic.  After a few minutes it’s time for the tomatoes and yellow pepper.  I let it all putter away until a thick sauce emerges. 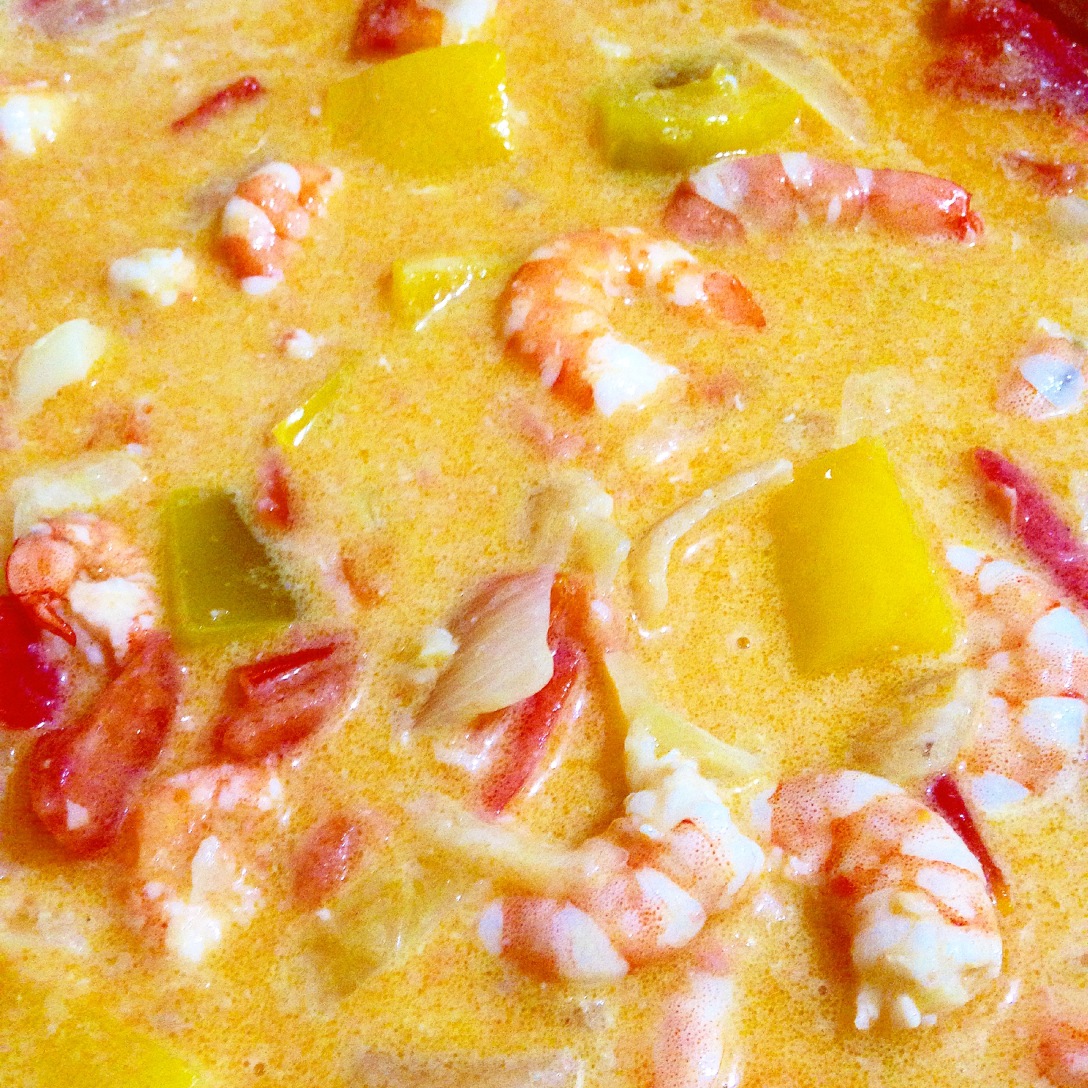 Now it’s time to add the shrimp, let it turn a bright red and white, then pour in the coconut milk and again, let it all putter away.

I’ve already cooked the rice, so it’s time to assemble for the family.  I first place rice on the plate, then top with a seared and baked namorado steak, and finally surround and cover with the Bahian shrimp.  Time to eat (drink mais cachaça) and why not put on one of our favorite albums, Tribalistas with Arnaldo Antunes, Marisa Monte and Carlinhos Brown.  Bon Appetit!

One thought on “When In Rio, Cook Like A Carioca.”