I read Immanuel Kant’s Prolegomena To Any Future Metaphysics after spending many years with Hermann Hesse, Franz Kafka, Jorge Luis Borges, Anne Carson, Gabriel García Márquez, and Virginia Woolf which means I understand Kant’s metaphysics through those authors, through The Metamorphosis, The Circular Ruins, Autobiography of Red, One Hundred Years of Solitude and The Waves.   My experience is the type of non-chronological reading Borges writes about in Kafka And His Precursors.

James W. Ellington, the translator of this prolegomenon in my hands, offers this definition of Kant’s approach,

The self for Kant becomes aware of itself and gains knowledge of itself only by bringing to self-consciousness (through a transcendental act of synthesis) the manifold of intuitions provided by sensibility.  Accordingly, the self knows itself only as an appearance (phenomenon).

I offer you a Borgesian insight with The Circular Ruins.  Appearance within appearance, phenomenon within phenomenon.

Early on Kant plays upon appearances by stating that though it may have looked like it, there has never been a metaphysics.

Nevertheless, I venture to predict that the independent reader of these Prolegomena will not only doubt his previous science, but ultimately be fully persuaded that it cannot exist unless the demands here stated on which its possibility depends be satisfied: and, as this has never been done, that there is, as yet, no such thing as metaphysics.  (257)

In doing this, Kant uses David Hume’s critique concerning cause and effect in order to take first steps in exploring phenomena and noumena, what is observed and what is in itself.  Kant uses Hume’s razor in order to consider a priori concepts and propositions overall, what must be done in any phenomenology or ontology.  And so Kant begins his metaphysical journey by attempting to determine whether it’s a journey or metaphysical at all.  Which brings me to to the gathering, cutting, melting, sautéing, and bubbling which turns objects seemingly contained unto themselves into a blur of the many.  Benedetta Vitali in her classic Soffrito introduces us to ragù.

If you open and Italian cookbook–that is not vegetarian, of course–you’ll surely find one or more recipes for meat-based sauces, or ragùs .  They may be extremely varied; for example, the Neapolitan ragù  is completely different from the Bolognese one, both in ingredients and in preparation.  Nevertheless, a trademark of Italian cooking is the ubiquitous presence of pasta sauces based on meat.  The one I will give first is the “meat sauce” of Florence, which nowadays is truly made of meat, but in the past could have been done with offal and brincellini (odds and ends).  (145)

I take my cue from “in the past could have been done with offal and brinecellini.”  I have a baking dish full of lamb brains and testicles left from my previous brains and balls recipe.  So let’s start moving through the appearances of a ragù.  First, melt a stick of butter.

One of my favorite poets, Seamus Heaney, once described butter as “coagulated sunlight,” [Churning Day] which might be the most elegant and economical way to describe its special alchemy.  (83)

Ah, that magic word–alchemy.  Perfect for any metaphysics. 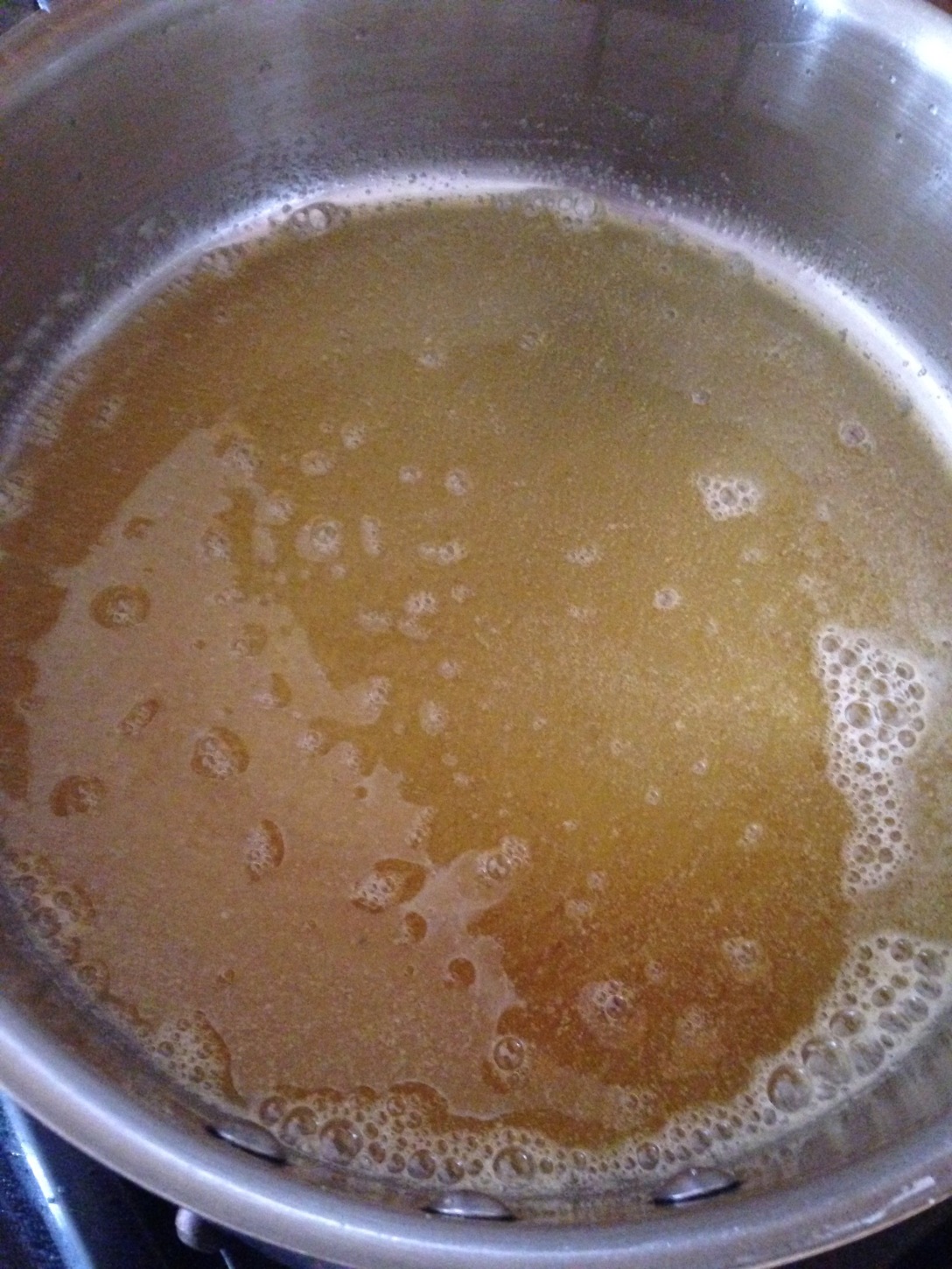 Kant makes an opening move in the “Preamble” that soon enough he will rephrase.

First, as concerns the sources of metaphysical cognition, its very concept implies that they cannot be empirical.  Its principles (including not only its basic propositions but also its basic concepts) must never be derived from experience.  (266)

It’s not clear to me why such a solid line divides reason from experience; creating the category “pure reason,” the a priori, and saying “thou shall not pass” to the physical realm.  The very word metaphysical suggests a blurring of understanding and the world, though given Kant’s categorical frame of mind, his classifications and divisions do not surprise.  An onion I can analyze and synthesize, looking it as a food to dice, defined as an aromatic and a root vegetable, and then turned into a taste triggering any number of sensations and memories.

Where Kant wants to go with pure mathematics is not a desire of metaphors and their associational logic.  Not pure, but melting and browning like butter that’s slowly turned a darker shade of yellow in an hour on a low flame so the onion dices will start their alchemical journey into caramelization.

With the addition of carrots and celery I have a mirepoix slowly sweating in the pan generating like a synthetic proposition a new look for the subject whether it’s butter or vegetables.

I add a can of whole tomatoes, “San Marzano” style, along with wide slices of collard greens.  To fulfill what I suggested Kant would do with his no man’s land between reason and experience, watch as he adjusts a bit,

We can say with confidence that certain a priori synthetic cognitions are actual and given, namely, pure mathematics and pure physics; for both contain propositions which are everywhere recognized as apodeictically certain, partly by mere reason, partly by universal agreement with experience, and yes as independent as experience.  (275) 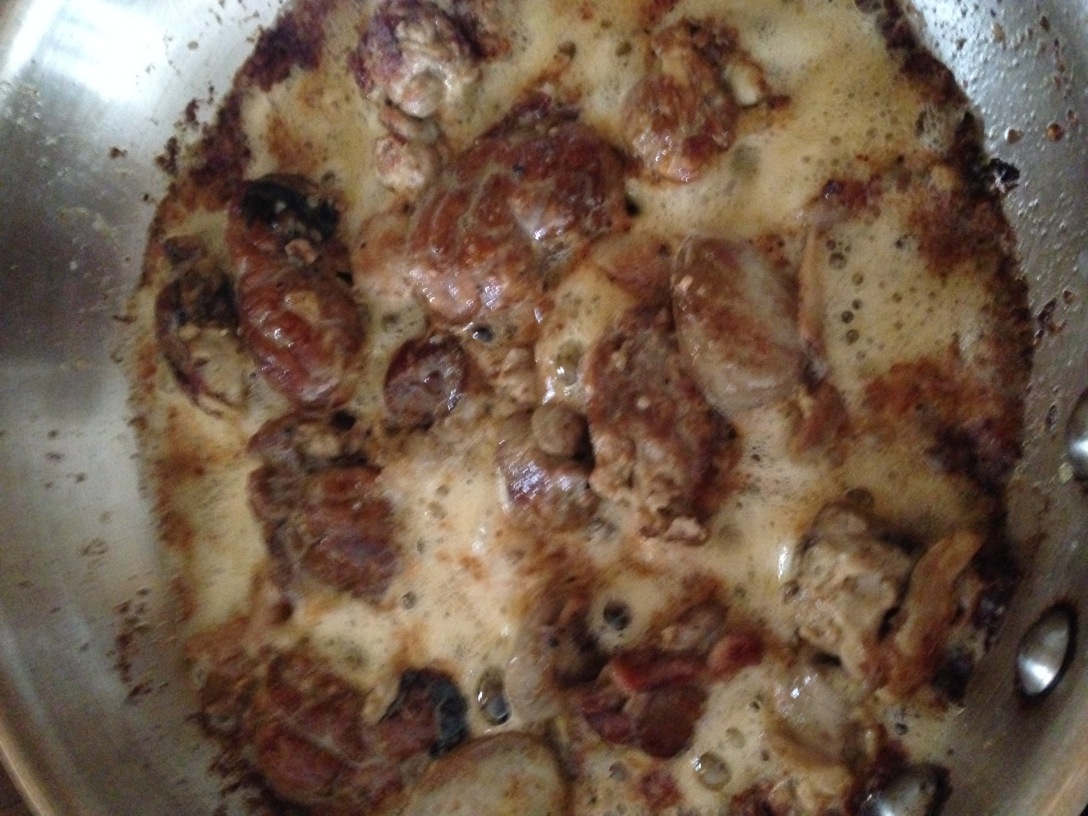 Kant tries to pull it back a bit with the end of the sentence but the trench has been leapt.  The presence of the experiential world has been allowed, with the caution of not being necessary.  Time to use the last of the lamb’s brains and testicles.  I melt a half-stick of butter and let the bits brown, brown almost blacken.  Matter changes before my eyes as I use ancient cooking techniques bringing mind and body together, bringing forth the world as nourishment and pleasure–a metaphorical and metaphysical delight.

The smell of bubbling, sizzling, foaming butter fills the house as I add the brains and balls to the ragù.  As I read through Kant’s musings I detect imagination and creativity are the subjects here, that metamorphosis and synthesis are at the heart of metaphysics.  Consider Kant’s rhetorical question.

For how is it possible, says that acute man, that when a concept is given me I can go beyond it and connect with it another which is not contained in it, in such a manner as if the latter necessarily belonged to the former? (277) 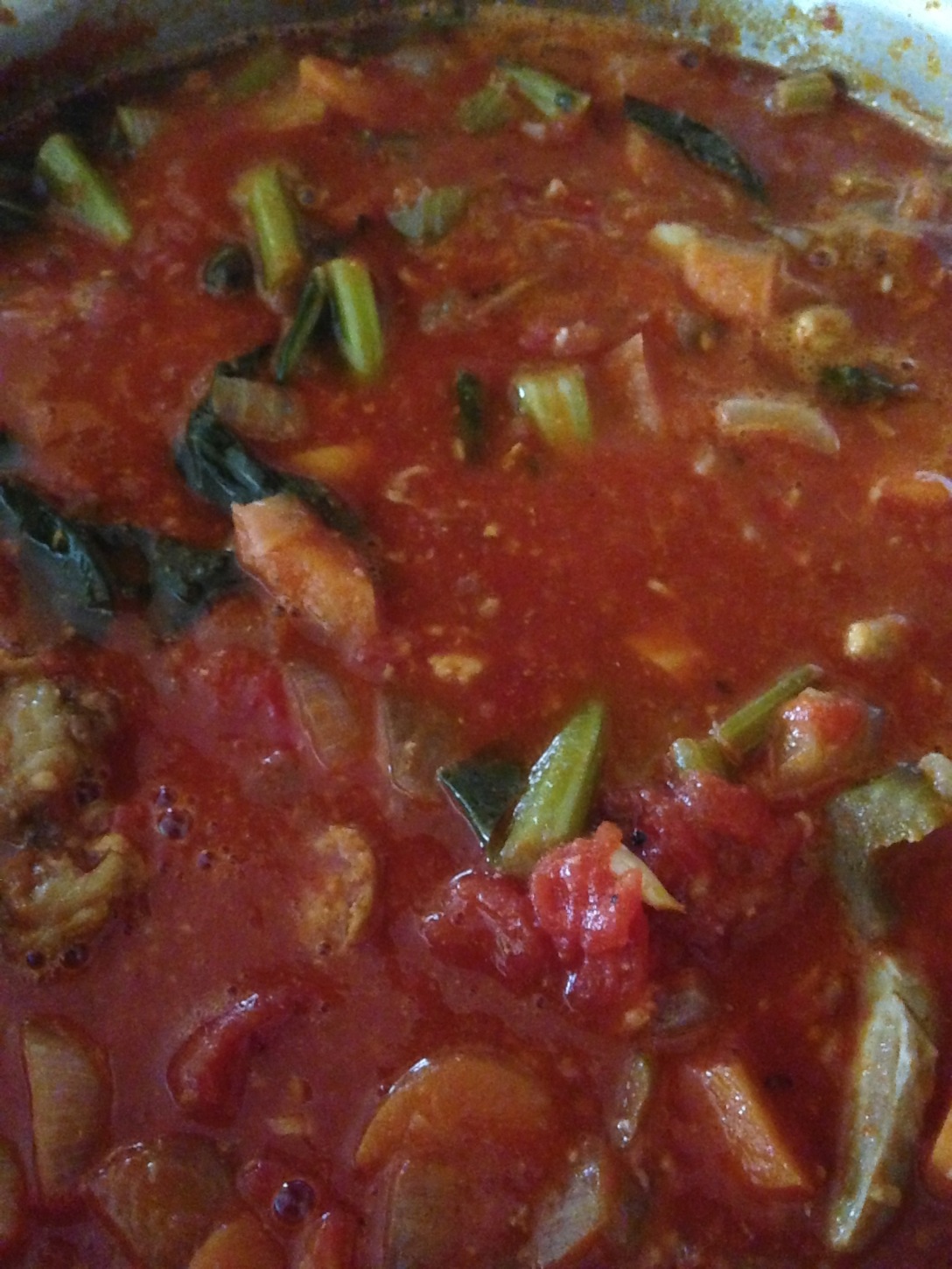 Butter to onions, to carrots, to a lamb’s brain, and they all become a ragù not contained in their earlier definition.  The acute man says, how is this possible?  Ah fire, ah water.  Tomato paste stirred in and then a cup of water added.  Time to start the long percolating.  I’m going to let this cook for several hours, which I am spending right now with my words in this post.  Ah, the maze of time.

To thicken the sauce and add flavor, I drop in a few slices of mozzarella.  It appears as Kant continues that the senses play their role in apprehension, in what Kant wants to term only cognition; the phenomena of the senses appears within the creative element that allows a world to be made through experience and imagination.

Therefore in one way only can my intuition anticipate the actuality of the object, and be a cognition a priori, viz., if my intuition contains nothing but the forms of sensibility, which in me as subject precedes all the actual impressions through which I am affected by objects.  (282) 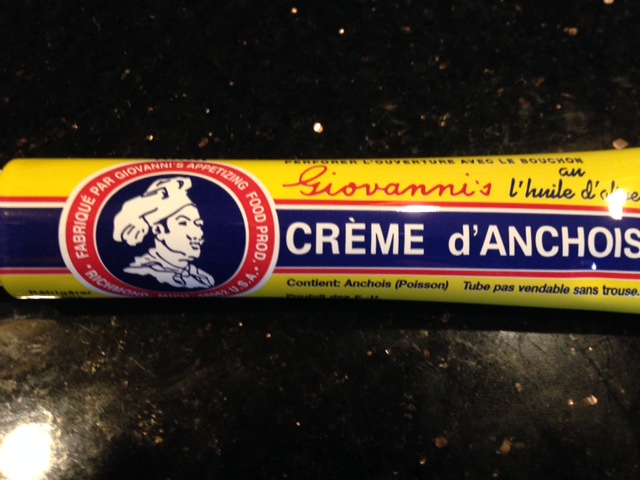 The ragù has been bubbling for a couple hours and it’s bright, buttery and sweet but I want a bit more umami so I squeeze in some Crème d’Anchois.  J. Kenji López-Alt in The Food Lab suggests anchovies and soy sauce as a way of upping the meaty flavor of a bolognese. 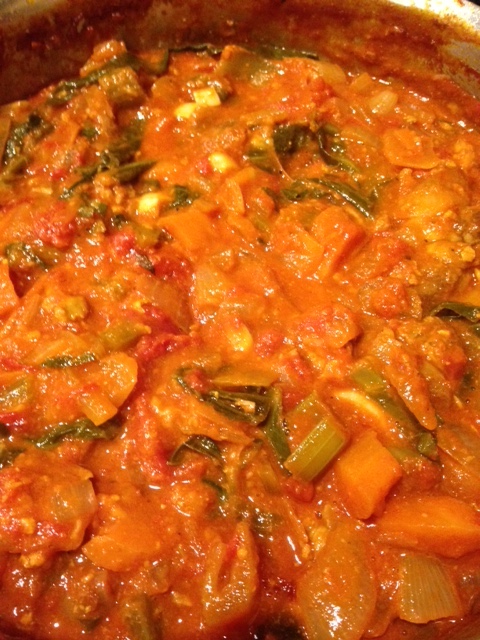 The ragù has aged well into the late afternoon. Colors have merged forming a bright orange-red sauce punctuated by the greens of celery and collards. Mozzarella, Asiago, Romano and Parmesan cheeses have thickened it all, and the taste balances savory, sweet, spicy and umami. Kant continues his thoughts and begins to move into Hamlet terrain as the young Prince twists within appearances as he longs to say what is, or in Kantian turns, as he struggles with a longing for analytic being as he lives in a synthetic world.  First, Kant.

Accordingly, it is only the form of sensuous intuition by which we can intuit things a priori, but by which we can know objects only as they appear to us (our senses), not as they are in themselves; and this assumption is absolutely necessary if synthetic propositions a priori be granted as possible or if, in case they actually occur, their possibility is to be conceived and determined beforehand.  (283)

Seems, madam! Nay, it is; I know not ‘seems.’            80
’Tis not alone my inky cloak, good mother,
Nor customary suits of solemn black,
Nor windy suspiration of forc’d breath,
No, nor the fruitful river in the eye,
Nor the dejected haviour of the visage,                        85
Together with all forms, modes, shows of grief,
That can denote me truly; these indeed seem,
For they are actions that a man might play:
But I have that within which passeth show;
These but the trappings and the suits of woe.

In a 1991 interview with The Paris Review,  the Nobel Laureate Octavio Paz offers a definition of poetry and novels using Kant’s terms, I think the poetic genius is synthetic.  A poet creates syntheses while the novelist analyzes.  In my Borgesian world where chronology performs like a maze, Kant analyzes Hamlet (David Tenant/Dr. Who) as he speaks, while I listen in the kitchen and offer a secondary analysis and synthesis.  Aren’t we all poetic?

Out of the pan and onto orecchiette and a white plate.  A pinch of salt and a grind of black pepper and we’re ready for the next step in the alchemical process, the next synthetic maneuver, the next poetic instantiation–chewing.  Meanwhile, Kant has moved to space and time, the very notions that so beguiled Borges throughout his work and especially in A New Refutation of Time.

Those who cannot yet rid of themselves of the notion that space and time are actual qualities inherent in things in themselves may exercise their acumen on the following paradox.  When they have in vain attempted its solution and are free from prejudices at least for a few moments, they will suspect that the reduction of space and time to mere forms of our sensuous intuition may perhaps be well founded.  (285)

With all this cognition, all this words words words words, I’m quite hungry.  It’s time to eat, so I will resume my reading of Kant and making sauce with “Prolegomena To Any Future Gumbo.”  Bon Appétit!