To cook, to eat, to kill.  An animal’s life taken, body split open, applied to fire and torn between teeth.  What are the aesthetic and ethics?  Dan Barber argues that good taste necessitates sustainable farming to table.  Tayyib and Halal mean the animal has been raised in a “good” environment–think ethically sourced and sustainable–and then ritually slaughtered.  Iman Dawood Yasin speaks on this in The Foundation of Ethical Eating and Conscious Consumption. Kosher means what is “fit,” what is “appropriate,” and like tayyib focuses on how a meal is brought to our table.  Rabbi Marshall Serels explains the kosher slaughter.  Carlo Petrini’s Slow Food movement emphasizes the care of animals and plants where one lives, and to harvest and cook using techniques and traditions created to bring out the best in food.

Fergus Henderson writes of what is ethical and sacred in The Complete Nose to Tail: A Kind of British Cooking,

‘Nose to Tail Eating’ means it would be disingenuous to the animal not to make the most of the whole beast; there is a set of delights, textual and flavoursome, which lie beyond the fillet.

What a gorgeous thing–a lamb’s head all deep brown from a slow cook in the oven, perfect for anyone who likes nibbling on bones.  It’s such a treat discovering all the different textures in the head: some bits creamy and sticky, others tender with a nice chew, the custardy brain, the meaty deposit behind the eye.

Eating offal was–and is–definitely not awful.  Different cuts of steak may be delicious, but they are mostly delicious in the same basic way.  Offal, though, gives you an amazing variety of textures and flavors.  Pig skin can be luxurious and velvety when braised; turned into a wild, rich “spaghetti”; or puffed into crisp, airy chicharrones.  Livers can be pureed smooth and silky, humming with mineral earthiness, or knocking you over with their meaty aroma when seared hard.  I grew to love all these cuts and became passionate about learning more and more about them–their traditional uses, their biological structure, the nutrition they provide (many are far more nutritious than muscle meats) and, of course, how to highlight their best features.

Jane Grigson in her magical book Charcuterie and French Pork Cookery offers this,

Organs, offal in other words, or variety meats if you live in the United States, can be a point of prejudice.  Before the war I remember hearing ‘Ai never eat Offal,’ spoken with emphasis and pride, a brave flicker of light in a crude waste of offal-gobblers, yet another pea felt through twenty mattresses.  War shortages taught better sense.  Nutritive values were proclaimed and prejudices fell, at least as far as kidneys, liver and hearts went.

Over the last four years I’ve been cooking brains, kidneys, heads, intestines, hearts and livers in my little anatomical theater of a kitchen.  I’ve roasted and eaten a suckling pig.  I learned to dig for the cheek meat and meat behind the eyes in pig and lamb’s heads. I’ve served chicken, beef and lamb livers on toast with a parsley salad or paired with mashed potatoes and peas.  Never, however, brains and balls together.

The journey begins with Phoenicia and their wonderful assortment of offal. 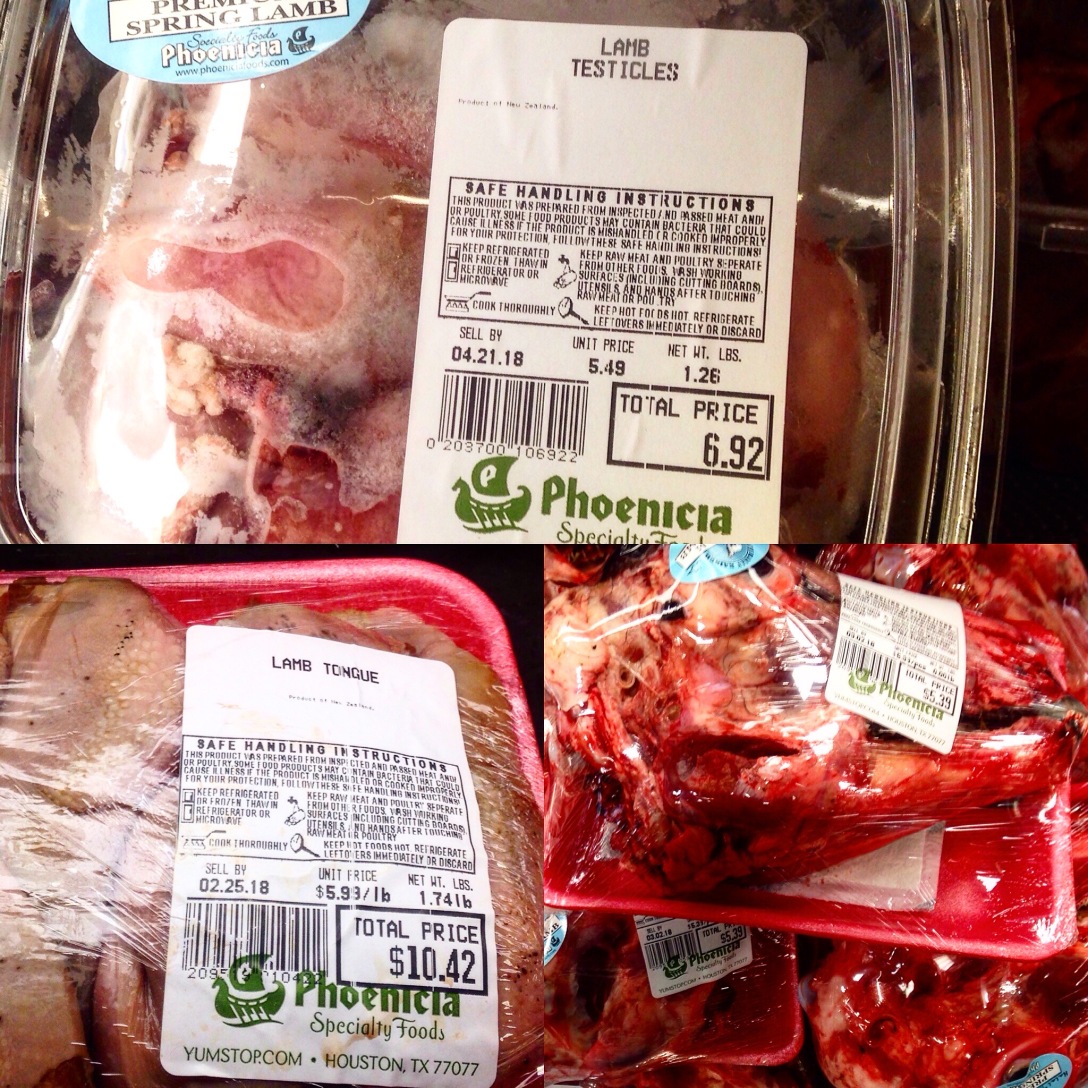 I bring my treats home and get down to prep.  First, music.  Devotchka often join me in the kitchen, their music a perfect pairing for my knife and cutting board.

Six little lamb brain beauties washed and patted-dry.  Hardly a smell to them at all.

Yesterday I made a court bouillon using red cabbage to add a wet earth taste and red tint.  I spoon the little lamb brains into a steaming pot just short of simmering for four minutes. 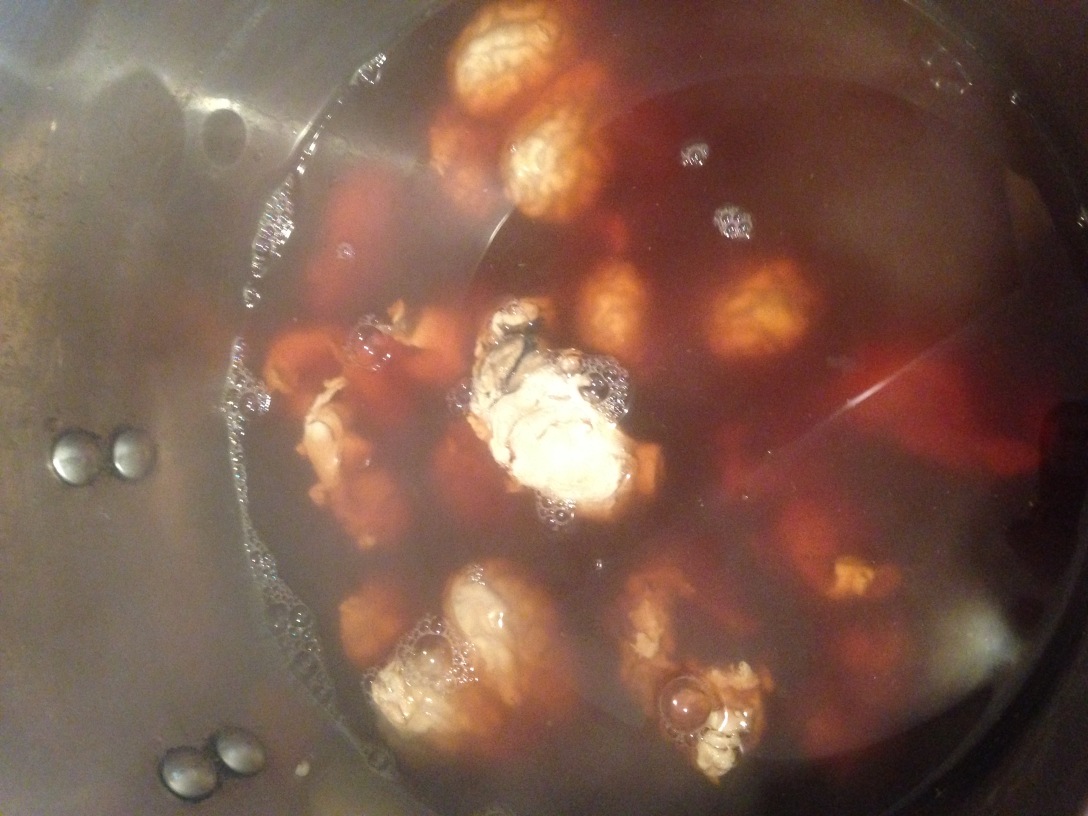 And immediately I think of William Blake.

Blake pairs his lamb with a tyger.  Words I consider as I scoop out brains and let them cool.

I am the Tyger as I cook the lamb.  A consideration for all of us who cook and eat what has been killed.  A thought which reminds me of Hannibal’s reflections on god.

God loves a good, bloody feast.  Yes, yes he does. Onward cooking soldiers.  When I open the package of lamb testicles and put my nose in, I smell fried food, that’s the aroma drifting up to me from what’s in my hands and in my memory.  Ss that sperm?  Testosterone?  I make another court bouillon and lay the balls in their warm bath.  Four minutes then out to cool.

Along the way, I cut a thick slice of rye bread and fry it in olive oil.

Time to sear.  I melt butter on medium heat, toss in cilantro leaves, and brown brains and balls.  The little lamb nuts when sliced open have the appearance of a hot dog or maybe a halved radish.

When they’ve done their Maillard Reaction thing, I slip them out, drop in more butter, and fry the toast a second time. 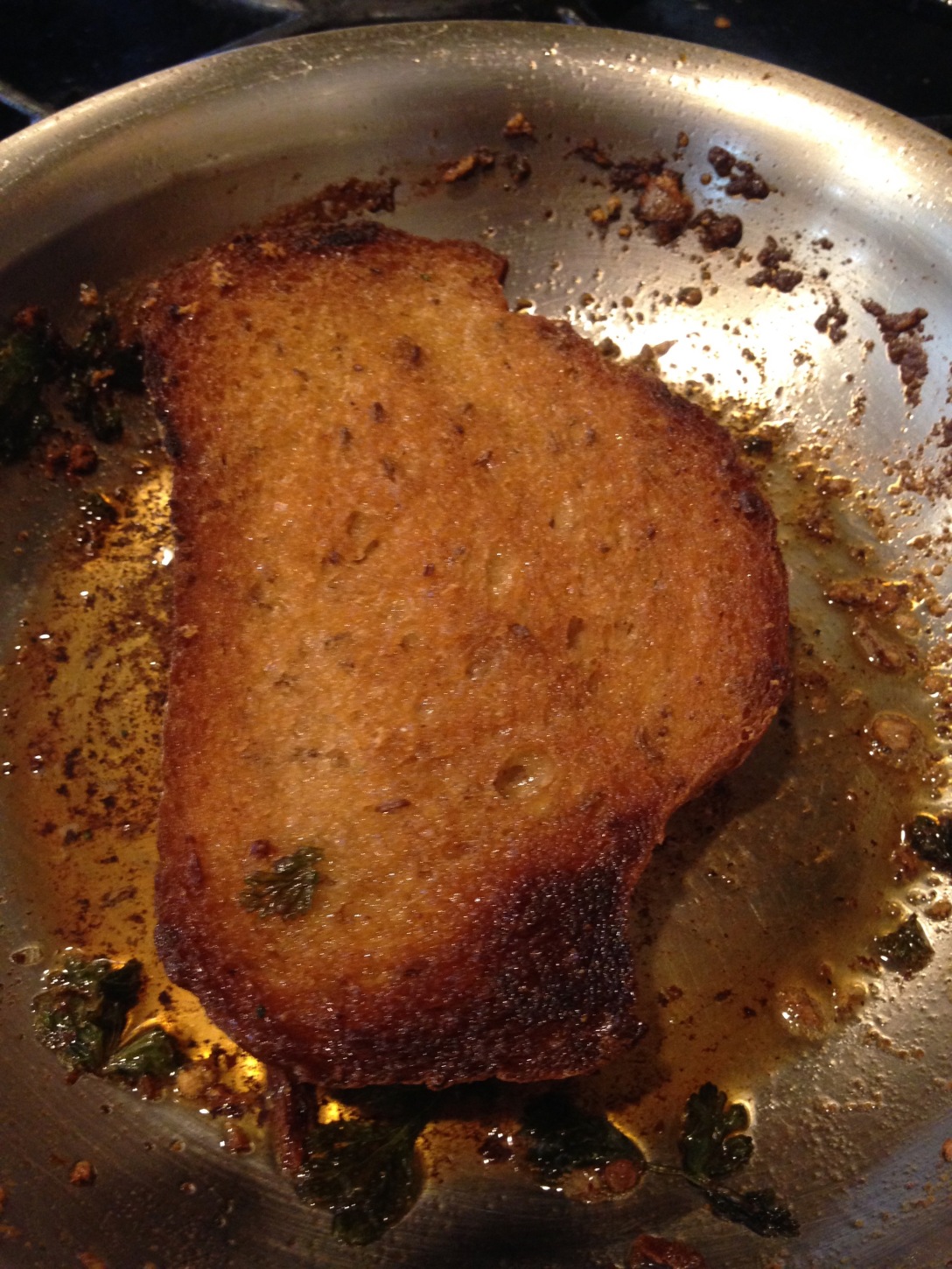 In another pan I’ve been slowly cooking onions and garlic in butter (Oh Lord, I love butter), time to drop in the brains and balls.

When all the flavors have joined together, I lift onion, garlic, cilantro, brainy and bally matter onto the toast with a healthy pinch of Maldon Sea Salt flakes and several grindings of black pepper. 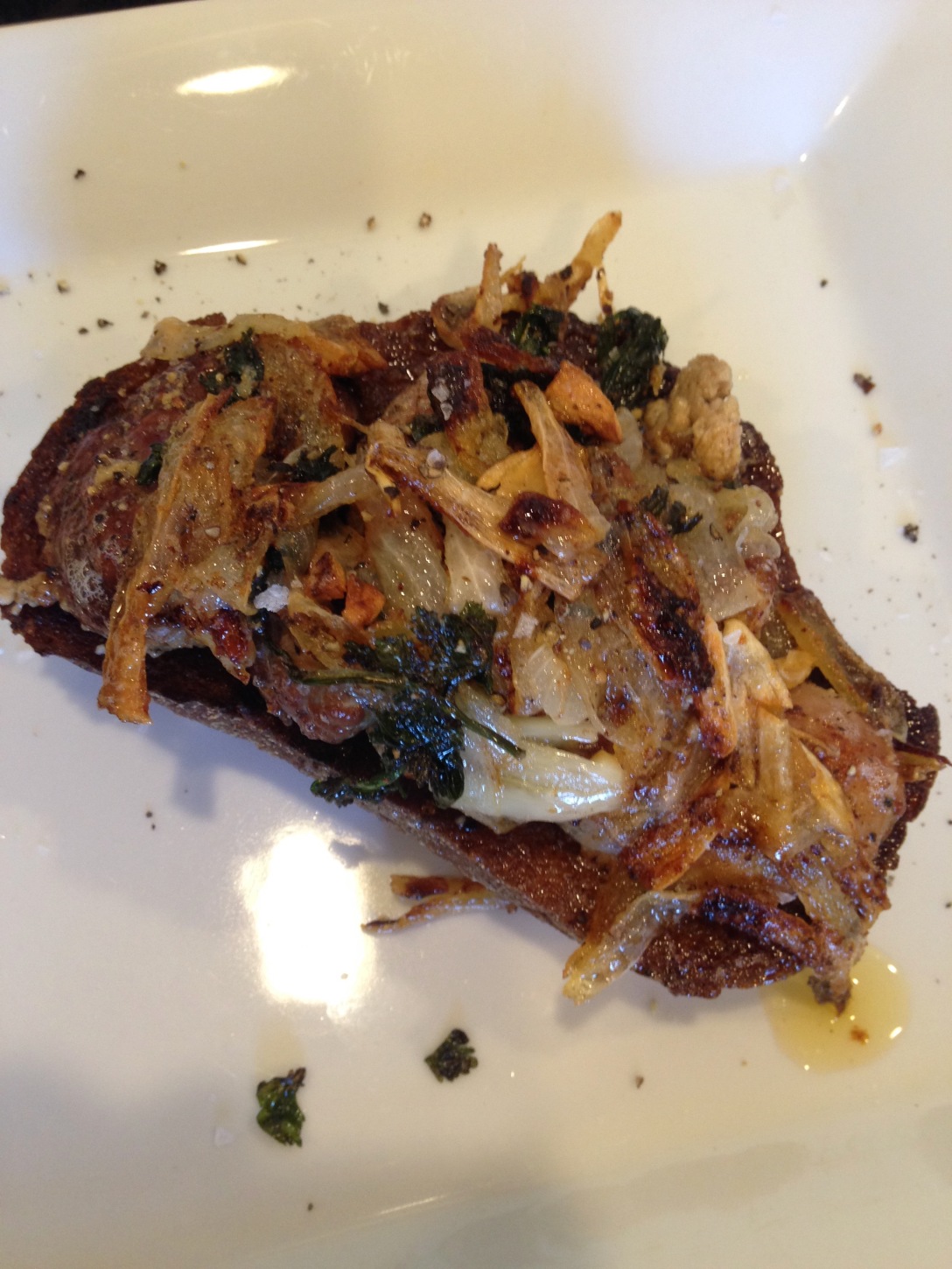 Time to cut in.  There’s a wonderful squish and crunch as the knife slices off a piece.

The toast gives over all its olive oil and butter while the lamb brains deliver a creamy-curds-like taste and texture while the lamb testicles remind me of eating a lamb’s liver.  A clean, fresh taste amidst all the frying of fats.

Each bites offers an incredible rich, dark palette.  A meal to savor, to contemplate.  This one piece of toast topped with offal fills me physically and metaphysically as I drink a porter beer, swirl animal, veg and grain in my mouth, and continue to think of the lamb, of the tyger.

One thought on “Brains and Balls.”